Amritaghateswarar Abhirami Temple அமிர்தகடேஸ்வரர் – அபிராமி கோயில் is located in Thirukkadaiyur, Tamil Nadu. It is one of the 275 Paadal Petra Sthalams. This temple is supposed to give longevity to devotees.

Lord Siva is worshipped here as Kalantaka (Destroyer of Death) and Goddess Parvati is worshipped as Abhirami (Lovely One). The temple is a beautiful 10th century temple spread over 11 acres.

Since Lord Siva subdued Yama in Thirukkadaiyur, the Lord is called Mrityunjaya (Conqueror of Death or Victorious over Death). Lord Shiva here is depicted herewith his forefinger raised warning Yama never to kill anyone while they are praying to Lord Shiva.

Couples who have celebrated their sashti-abta-poori (completion of 60 years) and sadhabishekam (completion of 80 years) make it a point to have a darshan of the Kala-samhara-moorthi. 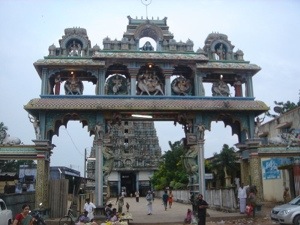