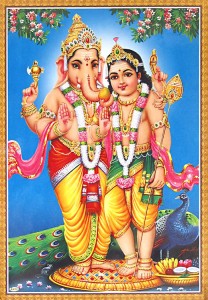 There were different ‘Avatars’ (incarnations) of Kartikeya and Ganesha in various Kalpas. In ‘Sveta Varaha Kalpa’, the two anecdotes about Kartikeya and Ganesha- the Illustrious Sons of Siva and Parvati- were narrated by Lord Brahma to His Son Devarshi Narada. As both the Brothers came of marriageable age, the question arose as to who should be married first and the parents decided that whosoever could circumambulate the entire Universe first would get the choice. Kartikeya flew off by His carrier- a peacock- without even waiting for a minute, Ganesha who applied His mind and recalled what Vedas stated that a single ‘Pradakshina’of one’s parents would yield the fruit of ‘Bhu pradakshina’. Even half way through the full circle of the World, Sage Narada intercepted Kartikeya and conveyed that Ganesha’s wedding with Siddhi and Riddhi was in progress already (they were blessed with two sons Kshema and Labha eventually). Kartikeya felt cheated by the parents and retired at Krouncha Mountain and the parents brought Him back by cajoling the dear son who felt hurt! It is on this day of Kartika Pournami, Kartikeya’s ‘darshan’ is considered as most auspicious.

The Story of Ganesha’s birth is indeed popular. When Nandi was asked to bar entry into the Interior Place of Parvati as She was taking bath, Nandi no doubt prevented but Bhagavan still entered and She was not amused. She decided to create an idol of a boy which was infused with life and empowered Him to challenge anybody with the necessary powers. The boy followed the instruction and did not allow entry even to Siva. The Pramadha ganas were asked to teach a lesson to the boy by Siva but they were defeated in no time. Siva Himself decided to force His entry but to no avail. Finally, an irritated Bhagavan snapped the boy’s head and Parvati became furious and Her angry manifestations surprised Siva Himself. She insisted that the boy be brought to life forth with. Siva suggested locating anybody sleeping in the northern direction and the Sivaganas were able to trace only an elephant. The severed head of the boy was fixed with that of the elephant and He was revived. The assembly of Deities who first fought with the boy and witnessed the entire scene earlier decided that any function in the World ought to be commenced with worship of Ganesha foremost as He is the Lord of preventing impediments and of providing success. Ganesha’s worship on Bhadrapada Sukla Chathurdhi is a must all over Bharatadesa as one is dreaded of becoming a victim of undeserving blames since Moon God received a curse from Ganesha that whoever saw the Moon on the particular Chaturdhi night without worshipping Him would become a sure target!