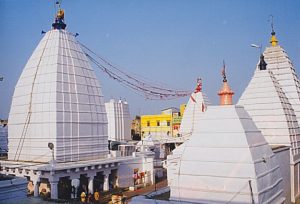 In the holy month of Shravan, devotees undertake a rigorous 100-km pilgrimage on foot from Ajgaibinath (Sultanganj) in Bhagalpur district to offer holy water from the Ganges to the Shiva Lingam at Deoghar.

Deogarh literally means the ‘ghar’ – house of the ‘Deo’ – God, ie the House of God. It is an ancient city. It is believed that the heart of Sati fell here, and is thus identified as one of the Sakti peetha. Deoghar has also been referred to by various names like Harda Peeth, Ravan-Van, Haritki-Van, and Ketaki-Van.