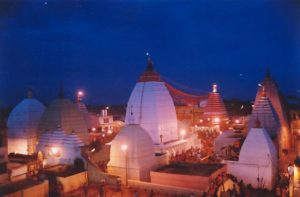 The name Deoghar which means god’s house in Hindi, seems to be of recent origin and probably dates from erection of the great temple of Lord Baidyanath. It has been referred as Haritakivan, Ketakivan, etc., in sanskrit texts. Certain parts of the front portion of the temple are said to have been built by Puran Mal, an ancestor of the Maharaja of Giddhour, in 1596(2). It is also a folk lore that the lost lingam was discovered in 1596 by a hunter named of Baiju. Since then it came to be known as Baidyanath and people also call it Kamma Lingam – the desire fulfilling lingam (1).

According to archeological survey Bengal circle for 1902-1903, in later GUPTA period Aditya Sen Gupta had errected many temples by several inscription (SILALEKH) in which Deoghar and Sahkund have been described.(1)

The temple of Baidyanath or Shiva faces the east and is a plain stone structure with a pyramidal tower, 72 feet tall. The top contains three ascending shaped gold vessels that are compactly set, and were donated by the Maharaja of Giddhaur. Besides these pitcher shaped vessels, there is a Punchsula (Five knives in Tridenta shape), which is rare. In the inner top there is an eight pettaled lotus jewel called Chandrakanta Mani.

The lingam installed inside, is of a cylindrical forming about 5 inches in diameter and projects about 4 inches from the centre of a large slab of basalt. It is not possible to ascertain how much of the lingam is buried. The top is broken and has uneven surface.

To the north of the town there is a wood called baba Jungle after a fakir; to the north-west is a low wooded hill called Nandan Pahar; and to the east about 10 miles away there is a low range of hills known as Trikuti or Trikutaparvata. There are a number of small hills to the south-east, south and southwest. There are two rivulets Yamunajor and Dharua near the town.

The Purans refer to this temple as fit place for funeral obsequies. The Siva Puran links it to Ravana, the stepbrother of Kuber and king of Lanka who felt that his capital should be graced by the presence of Shiva. Ravan, once realized that all his worldly possessions were useless until he did some godly things. He started “shodsopchar pujan” of lord Shiva. Later he did intense Tapsaya and made Lord Shiva happy and he was pleased by his submission but did not accede to his request and instead, offered him one of the 12 jyotirlingas / Kamana Jyotirlinga to Lanka which was quite as effective. However, there was a condition attached to the transfer of the divine emblem. Ravana was not supposed to break his journey and place the lingam anywhere else. In case of such a mishappening, the lingam would remain fixed on that spot forever.

The gods were most unhappy at the idea of the divine lingam being established in the enemy kingdom, which would render them powerless and realizing that Ravan will become invincible if he could take the Shiv Linga to Lanka, Goddess Parvati asked Ravana to take bath and do achaman (drinking some water) before touching the Shiv- Ling. In the process Ganga, Jamuna etc rivers entered the stomach of Ravana. On the way back to lanka, The god of water, Varuna entered Ravana’s body and urged him to relieve himself. Meanwhile, Vishnu disguised as an old brahmin, befriended Ravana and offered himself to hold the jyotirlinga for a minute (2).

Ravana realised his folly when he returned to see the lingam on the ground with the Brahmin nowhere to be seen. As per conditions of Lord Shiva the Jyotirlinga got established at that place itself and thats why the names – Baijnath dham, Baidyanath Dham, or Ravneshwar Mahadeo. Ravana did his best to uproot the lingam but beyond breaking the tip he was unsuccessful. He finally prostrated before the invincible lingam, which has ever since remained rooted at Deogarh. Although Ravana could not take the Shiv Linga to Lanka, he filled a well called Chandrakup with the holy waters of all important rivers. It is also said that Ravana was the first Kawarian who worshipped the lord with ganga-jal from Haridwar. In deep remorse, Ravana used to come to this place everyday and worship the lingam by offering water from the Ganges(1)(2).

It is the only place in India where one of the twelve jyotirlings and one of the 52 shaktipeeth lay side by side. Some of the Puranas ascribe the advent of Baidyanath at Deoghar to the Satya yuga or the first age of the world, when Sati, the wife of Shiva and the daughter of Daksha committed suicide in consequence of the discourtesy shown to her husband by Raja Daksha. Overpowered by grief Shiva, in a fit for frenzy, stuck the corpse of his wife on the point of his trident and roamed about like mad god, till Vishnu cut up the body with his Chakra into 52 parts which fell at different place in India. The heart, it is said, fell at the holy shrine Deoghar. Since the heart of Sati fell here, the shrine is called Hardyapeetha and the emblem of Baidyanath has also been established there by Lord Vishnu (7). It is said all desires in your heart gets fulfilled after worshipping the devi at the shaktipeeth here(1)(6).

Each year between July and August in shrawan month, 7 to 8 million devotees come from various part of India to offer holy water from the Ganges at Sultangunj; almost 108 km from Deoghar to present it to Shiva. Kawariyas undertake the journey on foot and reach Babadham in 3-4 days. They go on reciting bol bam bol bam on the way. Some kawariyas run nonstop on foot, from Sultanganj to Babadham for 108 km and they are called ‘Dak – Bam’. The tradition is that the water pot must not touch the ground till the time of consecration. NGO’s put up makeshift stands where the pots can be kept and put up food and medical stalls to cater to the Kanwarias.
There are many dharmshala, hotels and camps in way of Sultanganj to Babadham in which any Kanwariya can stop for rest. The route and the rules for the tour can be found at the links below.