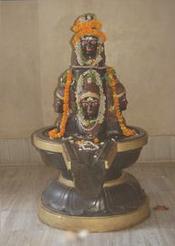 Bhagavan Anantha Deva is snow-white in physique and is as huge as a lion touching the sky possessing four feet of Dharma (Virtue), Gyan (Knowledge), Viragya (devoid of Worldly desires) and Iswarya (prosperity). He is Pancha mukha (five faced), Dasa Bhuja (Ten-handed), Trinetra (three eyed) on each face, of tranquil visage, extremely luminous like several Sun Gods, with crooked eyebrows, red blood eyes, fearful beard and jumbled moustache. He has an enduring ‘Mudra’ (posture) with quivering lips as though he has a devastating temper to destroy yet mildly-smiled, wearing half Moon, carrying a trident, parasu ( axe), Vajra weapon, and resembling ‘Agni golas’ or strings of innumerable fire balls. He is ‘Isana Deva’ sporting an ageless and glittering Crown of the charming face of a Maha Purusha, a sturdy heart of ‘Aghora’, feet like those of ‘Sadyojata’ and Guhyam of a ‘Vamadeva’. ‘Easana’ is a ‘Kalaprapurna’ with thirty eight ‘Kalas’ or features. He is ‘Pancha Brahmamaya’ (Full of Five Brahmas), Omkaramaya (Surfeit with Pranava), and Hamsa nyasa maya (Full of Swan like stylish walk). He is ‘Panchakshara’ (Five-lettered in Sanskrit viz. ‘Namah Sivaya’; He is also Six-lettered viz. ‘Om Namah Sivaya’; and ‘Shadanga Yukta’ or with Six-limbs. Bhagavan Siva affirms that He is an ‘Ardha- Naareeswara’ (Half Woman- Half Man). His left side of the body is ‘Manonmayi Gauri’. She is ‘Dhyana Swarup’ ( a personality in meditative feature) with an open and lustrously blossomed lotus-like smile and broad and shining eyes, full Moon-like visage, ornamented with half-Moon on Her head, smeared with red-tilak on forehead, wearing unusually pretty and fragrant flowers and a golden lotus on Her right hand for fun as an embodiment of Sadgunas. It is in such perfect company of Gauri Devi that a devotee faces Maha Deva, sprinkling Sankha (conchshell)-filled holy water on them reciting Omkara Mantras. The devotee offers to them ‘Padya’or water for washing feet reciting ‘Bhavey bhavey nathibhavey’ manthra; as ‘Achamanam’ or taking a bit of water saying ‘Vama devaya namah’; addressing Bhagavan and Devi with ‘Vastras’ saying ‘Jyoshthaya namah’; again ‘Achamanam’ saying ‘Rudraya namah’; ‘Kalaya namah’ with Sugandham; ‘Vikaranaya namah’ with ‘Akshatas’; ‘Bala Vikaranaya namah’ offering flowers and ‘Balayanamah’ with ‘Dhup’ or fragrant incense; ‘Bala Pramadhanaya namah’ with ‘Deepa Arthi’ and ‘Sashtanga Namaskara’ to Bhagavan and Devi Couple along with ‘Bindunada Pranava Mantras’. Thereafter, Bhagavan Siva told Devi Bhagavati:

[Siva, Maheswara, Rudra, Vishnu, Pithamaha or Grand father, Physician of the Universe, Sarvajna or the All- Knowing, Paramatma are the major eight names in vogue] Of the above Eight Names, there is an angle of ‘Upadhis’ or basis among the first Five Names from Siva to Pitamaha; the Five Upadhis are ‘Sthulopadhi’ (The Gross Body), ‘Karmopadhi’ (The Causal Body), ‘Sukshmopathi’ (The Subtle Body), ‘Akasa’ (The Divine Thought or Consciousness) and ‘Atma’ (The Inner Soul). There may thus be a number of names, but basically, there is only one name which has no Upadhis ie. Nirupadhi; no Gunas ie. Nirguna and no Vikaras ie. Nirvikara: He is Siva only! The next name is of Maheswara Tatva Gyan of twenty three Tatvas thas accompanied by the Maya Tatva or Prakrithi posseessing the twenty fourth Tatva and in all the twenty fifth Tatva of Purusha is Maheswara. The next name of Bhagavan is Rudra who is the root cause of Sorrows and is also the effective remover of Sorrows too.But Vishnu being the all- pervasive Shakti spreads and perpetuates ‘Maya’ by the interaction of ‘Tatvas’and hence Vishnu is the cause and effect of Tatvas of Siva. Pitamaha is another primary name of Siva who is responsible for Srishti and is the Eldest of the World or the Great Guiding Force of Humanity. Vaidya or the Physician of not only the physical ailments all the residents of the Universe but more importantly is the most efficient curer of the Other-wordly feelings, actions and aspirations by endowing with right guidance of Tatvas and Siva Gyan to lead onto the path of self realisation. Sarvajna is He who is not only aware of the interactions of Maya and Realism but is fully equipped with the awareness and methodology of attainment. From the stage of Sarvajna who has the knowledge of ‘Gunas’, the devotee has to qualify to realise the Self (Atma) and to Siva Himself as that Super Power is Paramatma, Pranavatma, Avinashi and Mahadeva.