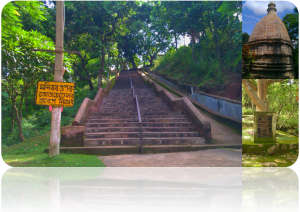 Kedareswar temple is also an important medieval Shiva temple constructed by Ahom King Rajeswar Singha in 1753. Temple is located on the top of Madanchala Hillock about 32Km from Guwahati in Hajo Kamrup district of Assam. This is one of the rare Svyambhu (self originated) ling in the Ardhnareswar (male & female) form of Lord Shiva.