Lingdbhavmurti (लिंगोद्भवमूर्ति) is an iconic representation of origin of Lord Shiva’s from fiery ling during Lord Brahma Vishnu tussle at the beginning of Ishan Kalp (इशान कल्प).

It comes from the exterior decoration of a south Indian temple. It is also found in some temple painting and artwork.

Shiva stands in an oval of flames wearing a tall crown and holding his distinctive attributes, the deer and axe. This image combines the an-iconic form of Shiva as a linga. Images of Lingodbhava are popular in Tamil Nadu and Shaiva temples normally have an image of this deity on the exterior of the rear or west wall of the main sanctum.

Lingdbhavmurti in Temples
Agamas (आगम) from south India have described in detail about how it should be represented in the temple. Paucity of such account from North Indian or Sanskrit text, explain why they are not seen in the North Indian temples.

Specification:
Lingodbhavmurti should be placed in the niches (देवकोष्ठ) in the Western wall of Sanctum sanctorum (गर्भगॄह) of a temple. According to Amsumadbhedagama Lord Shiva in form of Chandrasekharmurti (चंद्रशेखरमूर्ति), should be carved on the front of Linga.

Karangagma states top and bottom fifth part should be left out without any sculpture. Chandrasekarmuti’s (चंद्रशेखरमूर्ति) legs below knee should not be sculptured. On the right of the Linga and near its top Lord Brahma should be represented in the shape of Swan (हंस), while Lord Vishnu should be carved in the form of a boar (वराह) on the left at the bottom of the ling. The figure of Brahma and Vishnu should be sculptured on the right and left respectively of Linga and also facing it with the two hands held on the chest in the Angali (अंजलि) pose. The colour of the figure of Shiva should be red, that of Vishnu black and that of Brahma golden yellow.

Kamikagma explains few more details. The size of swan should be the same size as that of the face of Shiva, while boar twice that of face of Shiva. The figure of boar should be worked out as digging into the earth. The figure of Vishnu and Brahma should be expressing submission and be sculptured beautifully or they should be altogether omitted from the panel; in this later case the swan and the boar should necessarily be there.

The Silpartna adds that Shiva should carry the Sula in one of his hand; whereas Karangama requires that of the four hand, one should be Abhaya mudra (अभय-मुद्रा), another is in the Varada mudra (वरद मुद्रा), the third should carry the parasu and the fourth as black buck (कृष्ण मृग), and that of the digit of the moon (चंद्र कला) above the crown of Shiva. 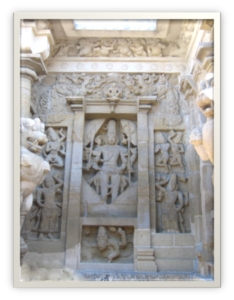 1.The Kailashnath Temple Kanchipuram constructed by Pallava King Rajsimha in 8th Century AD is very close to the specification pointed out in the scripture. Figure of Lord Shiva as Chandrasekharmurti (चंद्रशेखरमूर्ति) has eight arms of which one is held in the Abhaya mudra (अभय-मुद्रा), another in katyavalambita mudra (resting upon hip). , One carrying parasu, the seela and akshya mala. Fifth part of the ling is left un-sculptured and legs of Shiva below the knee are left out. The digit of the moon is shown on the crown of Shiva. The boar (वराह) avatar of Lord Vishnu with four hands out of which two are shown as digging the earth and the other two are shown carrying the Sankha (शंख) and Chakra (चक्र). Lord Brahma is seen flying on the top in his own form instead of as a swan (हंस). The figures of Lord Brahma and Vishnu each having four arms are sculptured on the right and left side of the ling. They have each one arm lifted up in the pose of praising, while the other katyavalambita pose rests upon the hip and the remaining one carry their characteristic weapons. The top of the niche has got a highly artistically carved maker torna (मकर तोर्ना). 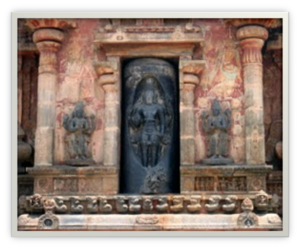 2.The Airavateshvara temple at Darasuram constructed by Cola between 1146 CE – 1172 CE. The central sculpture is in form of a lingam which seems to be added as a separate image. Shiva is shown with four hands carrying parasu and black-deer in two back hands, one front hand is in Abhaya pose (अभय-मुद्रा), and another in Katyavalambita pose. Legs below knees are not carved as per direction in the texts. Brahma is shown as flying swan on upper right of lingam and Vishnu as a boar on bottom left. The boar is shown with four hands, two hands are shown digging into the earth. Brahma and Vishnu, in original form, are sculpted on right and left side of lingam. Both are shown with four hands, two hands in Anjali (अंजलि) pose and other two carrying their characteristic attributes. 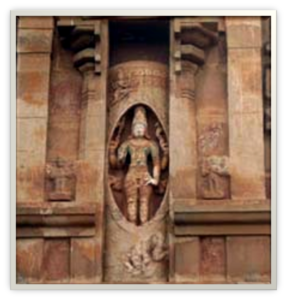 3.The Brihadeshvara temple at Thanjavur constructed by in . It is similar to the above sculpture of Darasuram, with few deviations. Here also lingam is shown in its original form, in which Shiva is shown standing. He is sculpted with four hands, in two back hands he is carrying parasu and black-deer and one front hand is in Abhaya pose and another in katyavalambita pose. Brahma is shown flying on top right portion of lingam, in his original form but not as a swan. Vishnu shown bottom left in form of a boar with two hands, busy digging into the earth. Brahma and Vishnu, in their original forms, are sculpted on right and left side of linga. 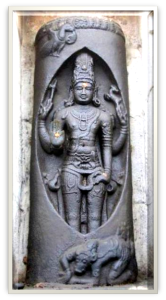 4.The Tiruvathathural (Ambar Mangalam) temple constructed by Cola between 11-12th Century AD. In this ling has a wreath of flowers thrown over its top. Lord Shiva is shown standing and one fifth of the top and bottom are not sculptured. He is sculpted with four hands, in two back hands he is carrying parasu and black-deer and one front hand is in Abhaya pose (अभय-मुद्रा), and another in katyavalambita pose. The legs of the figure of Shiva below the knee and up to the ankles are not sculptured. The feet alone are kept hidden in the linga. Brahma is shown flying on top right portion of lingam, in the form of a swan. Vishnu shown bottom left in form of a boar, half man and half beast with two hands, digging into the earth. 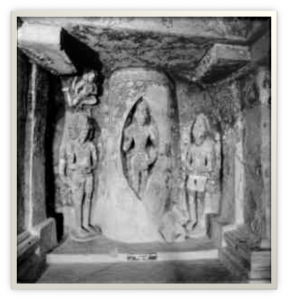 5.The cave temple of Dasavatara in Ellora was constructed by King Rastrakuta between 725 CE – 755 CE .Here also Lord Shiva is emerging from the middle of blazing pillar of fire at the centre, having one hand in the Abhaya mudra and another in katyavalambita mudra. Two other hand carrying parasu and the mrig (black buck). Linga is like a pillar with a capita. Flames are bursting out in tongue on both sides of pillar. Brahma with four faces has seen flying in the air. Vishnu as Varah (वराह) is digging the earth with his hand and snout. On the right and left are seen Brahma and Vishnu respectively, standing in a reverential attitude with the hands in Anjali pose and other hands carrying their respective objects. 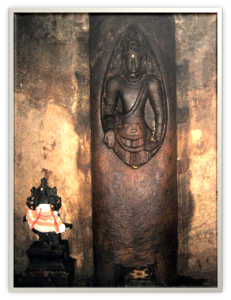 6.The Cave temple of Thirumayam constructed by Pallavas between 600 CE-650 CE. On the eastern lateral wall, a colossus Lingodbhavamurti is carved. The lingam is well rooted with the base and also with the roof of the mandapa. In between is an image of Shiva as Chandrasekhara. Lord Shiva has two hands in Abhay and Varada mudra. However Lord Brahma and Vishnu are not seen on this image. 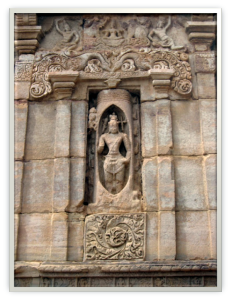 7.The Virupaksha temple Pattadakal was built by Queen Lokamahadevi in 745 AD to commemorate her husband’s victory (Vikramaditya II 733 AD – 746 AD) over the Pallavas of Kanchi. A group of monuments at Pattadakal, is located in the Bijapur district of Karnataka.The best known Virupaksha Temple, earliest of the temples in the Chalukyan series, The temple closely resembles the Kailashnatha temple in Kanchi which served as a model for this temple. The Virupakhsa Temple in turn served as an inspiration for the Kailashnatha Temple built by the Rashtrakuta dynasty in Ellora. The well decorated wall niches shown have Lord Shiva carved inside ling with four hands and Lord Brahma on the left top while Lord Vishnu is not clearly visualized. There in no image of Lord Brahma and Vishnu on the side. Decoration on the top and bottom of the ling is remarkable. 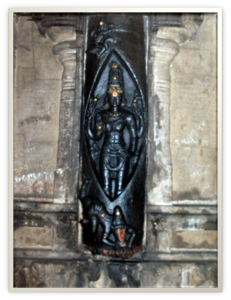 8.The Arunachaleswar temple of Tiruvannamalai constructed by in. This legend described above is held at the vast Arunachaleswara temple complex at Tiruvannamalai, where the sacred Annamalai hill itself, is considered to be a manifestation of this cosmic column of fire. Tiruvannamalai, is one of the Pancha Bhoota Stalas, representing the primordial element fire. Here again there is partial depiction of Linga with Shiva having four hands and Lord Brhma and Vishnu on the top and bottom of the ling. It is carved in a pillar without Lord Brahma and Vishnu on the side panel. 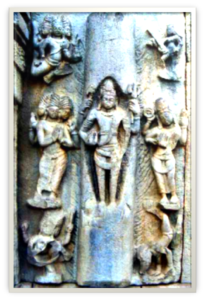 9.The Swarga Brahma Temple, built around the 7th century, is an important shrine situated on the left bank of the river Tungabhadra in Alampur, Andhra Pradesh. The noteworthy feature of the temple is an inscription above the dwarapalika image, which states that the shrine was constructed by Lokaditya-Ela-Arasa, in honor of the queen of Vinayaditya, called Mahadevi. Swarga-Brahma is a hall temple with the shrine positioned at the end of the hall. The outer walls of the temple depict Krishna leela and have drawings of animals, garuda-nose faces and matrumurti. One of the new dhyana or meditation mantras or hymns is a wall sculpture entitled Lingodbhavamurti of Shiva. The temple has a six pillar porch on the east, decorated with amalkas. The temple has a curvilinear Shikhara of the northern style, with a figure of dancing Shiva carved in the Chaitya window of the Sukanasi.

10.Lingodbhava manifestation of Shiva at Trimbakeshwar Jyotirling Temple: There is a legend that after manifestation of Shiva as cosmic column of fire and Brahmas lie to find the top of the column made Lord shive curs him not be worshipped on earth. In turn Brahma cursed Shiva that he would be pushed underground. Accordingly, Shiva came down under the Brahmagiri hill in the form of Tryambakeshwar. Trimbakeshwar Temple is the only place where Shivlinga is not out but it’s inside the floor.

11.Lingodbhavamurti from Harsnath, Sikar Rajputana, Central Rajputana Museum Ajmer (second half of 10th Century AD) A lime stone image. The long slender column on which figure of Shiva is depicted has both the therimorphic and worshiping anthropomorphic figure of Brahma and Vishnu (2). the stele is traversed in its middle by the fiery pillar. On the left Brahma is soaring upward and on the left standing in submission pose. To the right of the pillar Vishnu is blowing his couch, hurls himself downwards and standing like Lord Brahma. The top of the slab, the high region, traversed by the pillar, is a palpating, mass of movement and its shapes are Swan (हंस) and celestial spirits.