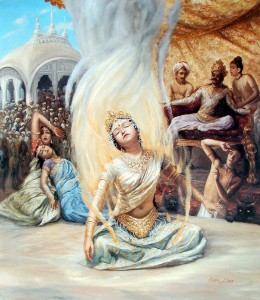 Sati (सती), also known as Dakshayani (दाक्षायणी) was the youngest daughter of Daksha (The skilled one, also the son of Brahma) and Prasuti. She had married Lord Shiva against the wishes of her father.

Dakshayani Sati wanted to go to her father Raja Daksha’s house to participate in the Yagya (Yagna) organized by him. Daksha did not invite Shiva or Sati. But Sati heard about the sacrifice and resolved that she would attend it, invitiation or no invitation, as it was at her  fathers place. She requested Shiva to let her go, but Lord Shiva was not relenting as they had not been invited. Finally, on Sati’s insistence, Shiv reluctantly allowed her to go to her fathers house. Sati finally travelled to her father’s house in a beautiful Vimana, escorted by Nandi and Rudraganas.

Daksha had set up reserved places for all Gods, but had not kept one for Lord Shiva. Sati asked her father why there was no place for Siva. Daksha said “This is a Deva Yagya, not a Preta Yagya. At a place where Gods are invited, Ghosts cannot be invited.” Your husband Shiva is the Lord of the Ghosts, and he lives with animals. I cannot invite him. Sati defending her husband by saying that Shiva was one with nature, and did not seek to control nature or animals.

After repeated insults by Daksa, Sati finally told her father that she no longer wanted to be associated with the body he had given her. She said that she wanted to be born again to a father that she could respect. She sat down, closed her eyes, meditated, and began to increase her own inner fire through her yogic powers until her body burst into flames. Sati thus sacrificed her body.

Hearing the news, Shiva’s Rudraganas rushed inside the Yagya ceremony hall and started attacking the guests, but had to retreat. Hearing the news, Shiva grabbed a lock of his matted hair and threw it against the ground. From the two pieces of hair rose the ferocious Virabhadra and Rudrakali, while Bhadrakali arose from the anger of Sati herself.

Upon Shiva’s orders they stormed the ceremony. Virabhadra roared and the sound of the roar was so terrible that several of the gods began to run away. The earth shook with the sound of the roar. There were tidal waves in the ocean. They destroyed the Yagya, and cut off Daksha’s head as well as many of the guests. Veerabhadra threw Daksha’s head into the Yagna fire pit.

Brahma and many of the Gods pleaded with Shivji to be merciful. Siva thus brought back to life all the guests who had been killed, and replaced Daksha’s head with that of a sacrificial Goat. With his ego destroyed, the ever grateful Daksha went on to become one of Shiva’s most devoted, attendants. If anyone sees Lord Shiva with devotion and submission, his heart is immediately cleansed. 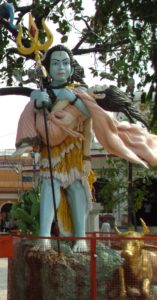 Still grieving, Siva picked up the charred remains of Sati and performed the Tandava dance of destruction all across the world. All the Gods rushed to Lord Vishnu to end this descruction and restore Shiva’s calm. Vishnuji used the Sudarshana Chakra to cut Sati’s body into 51 pieces. These pieces fell at different parts of the world.

The 51 places where different pieces of Sati fell went on to be respected and revered as 51 Shakti Peethas.

Sati later incarnated as Parvati, the daughter of Himavat, king of the mountains, and his wife, the apsara Mena. This time, Sati was born as the daughter of a father whom she could respect. Himavat was a devotee of Lord Shiva. Parvati sought and received Shiva as her husband, never to part with him again.