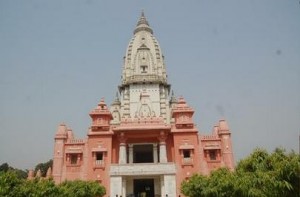 The New Sri Vishwanath Temple / Birla Mandir is located in Kashi / Varanasi in the Banaras Hindu University (BHU) campus. Made of white marble, the tall temple has a height of 76 m / 250 feet.

The temple was built as a replica of the ancient Kashi Vishwanath Temple.

Pandit Madan Mohan Malaviya, Founder of BHU: “India is not a country of the Hindus only. It is a country of the Muslims, the Christians and the Parsees too. The country can gain strength and develop itself only when the people of the different communities in India live in mutual goodwill and harmony .It is my earnest hope and prayer that this centre of life and light which is coming into existence, will produce students who will not only be intellectually equal to the best of their fellow students in other parts of the world, but will also live a noble life, love their country and be loyal to the Supreme ruler.”