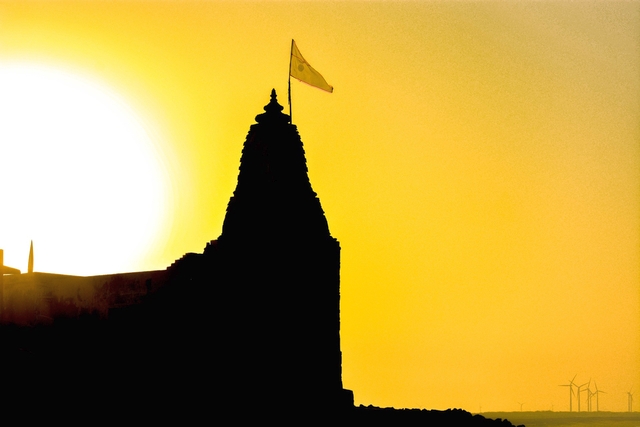 The Story of the seventh and the current Manu Vaiwaswata was indeed outstanding and eventful. Surya Deva who was also called Viwaswan married Vishwakarma’s daughter Sanjna Devi. But since Surya was too powerful and radiant, Sanjna was unable to withstand his heat and light and was so afraid of him that she could glance him with wobbly and unsteady eyes. The couple gave birth to Viwasvata Manu and Yama Dharma Raja. Yet, Sanjna Devi could not adjust and continued to suffer Surya’s heat; Surya got annoyed and cursed her that she would give birth to a River named Yamuna whose course was uneven and unsteady. Sanjna Devi couple was unable to hold the wrath of her husband any longer and having created a Chhayaa Sanjna (a shadow of hers) and briefed her to pretend like the original Sanjna, left for her father’s home. Her father Vishwakarma chided her and asked her to return to her husband. But she assumed the Swarupa of a mare and commenced performing Tapasya in a far off Mountain meadows.Vishwakarma and Devas prayed to Surya to reduce the severity of his Swarupa to sixteenth of his original energy.[ The remaining parts were absorbed in Lord Vishnu’s Sudarshana Chakra, Shiva’s Trishula, Kubera’s Palki or palaanquin, Yama Raja’s ‘danda’ or stick, Kartikeya’s weapon called Shakti and various Astras or Mantrika Arrows]. Meanwhile Chhaya Devi settled down and gave birth to Shaneswara and River Tapati. In course of time, Yama Dharma Raja noticed Chhaya Devi’s attitudinal changes in displaying partiality of treatment to Shanishwara, and River Tapati as against the earlier children. As Yama complained to Surya about the partiality of Chhaya Devi, Surya confronted her and she blurted out theTruth that original Sanjna created her as a shadow replacement. On finding out the whereabouts of the original Sanjna Devi, Surya also assumed the form of a horse and landed where the mare was in meditation. Presuming that a horse was trying to reach her, the mare sought to secure her rear and in the process their noses got entangled and two sons named ‘Naasatya’or nose-born and ‘Dastra’ ot teeth-born were materialised. There after a horse-riding son with Shield and Sword was born named Revanta. Sanjna was happy that her Tapasya succeeded in reducing the severity of Surya Deva. Eventually Vaiwaswata became the current Manu, Yama Dharma Raja the Lord of Death, Yamuna and Tapati as the famed Rivers and Shaneeswara as a Planet. The Sanjna-Chhaya combine also gave birth to two Ashwini Kumars who became the Physicians of Devas as well as Saavarni the future Manu.