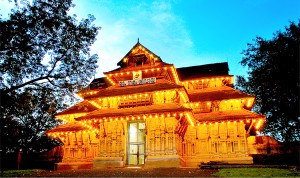 Lord Siva is worshiped here as Vadakkunnathan, the Lord of North. The temple is done in beautiful style typical of Kerala, and has beautiful murals and art. It is surrounded by a massive stone fortification wall enclosing an area of nearly 9 acres. The sprawling Thekkinkadu Maidan (or forest of teak woods) or Thrissur Swaraj Round encirlces the Vadakkumnathan Temple, and is the venue of the Thrissur Pooram Festival.

The Vadakkumnathan temple is famous for its murals paintings, especially Vasukisayana and Nrithanatha murals, a 350 years old reclining Shiva (Panivarai Siva), and a Nataraja mural with 20 arms.

The Vadakkunnathan Temple is over 1000 years old. This is often regared as the first of the 108 Shiva temples built by Lord Parashurama. It is said that Guru Adi Sankaracharya was born after his parents had prayed to Lord Siva here. The idol of Lord Siva here is covered under ghee formed by the daily abhishekam over the years.

During the Aanayoottu – feeding of auspicious elephants festival (The first day of the month of Karkkidakam of the Malayalam calendar – usually July) at the Vadakkumnathan Temple, the sacred elephants are worshipped and fed. It is believed that Gaja Pooja – worshipping and feeding the elephants is a way to satisfy Lord Ganesha for the fulfillment of wishes. Traditionally, Hinduism has always been one with nature.

Thrissur in Kerala, South India. Thrissur was formerly Thrishivaperur or Thirushivaperur – Thiru-Shiva-Perur (Malayalam: തിരു-ശിവ-പേരൂര്‍). Thrissur literally means “The City with the name of the Lord Siva”. 80 kms from Kochi, 120 kms from Coimbatore.