Markandeya went to his father and asked “Why are you so sad… Is there anything I can do?”. Mrikandu rishi told his son, Markandeya, the story of his birth. “Me and your mother Marudmati did not have any child. We prayed to Lord Siva, who was eventually happy with our prayers. Shiva blessed us and gave us a choice of either having a gifted son with a life of sixteen years on earth, or a child of low intelligence but with a long life.” Mrikandu rishi went on and said, “I told Mahadev that I did not want a low intelligence child. Lord Shivs said Tathastu and went away. So we were blessed with you, Markandeya, an extremely intelligent and virtuous child who keeps his parents happy.” Rishi Mrikandu hugged his child and started crying. He said, “Now, your sixteenth year is about to end”.

“Don’t worry for me” Markandeya said seriously, and politely convinced his father “God helps his true devotees. I will seek refuge at his feet, pray to him, and ask him for the boon of immortality”

Markandeyaji touched his parents feet, applied the dust on their feet to his head, and went to the seashore in the south while praying to Lord Shiva. He east abolished a ShivaLinga on his own name, had a ritual bath, and with full devotion started praying to Lord Mrityunjaya. Lord Shiva was impressed in one day itself.

On the day of his death, Markandeya had his bath and was about to start praying to the Lord. His throat choked, and he saw Yama staring at him. He said, “Please let me finish my Maha Mrityunjaya Stotra”. Yama replied, “Kaal does not wait for anyone”. Yama tried to pull Markandeyaji’s life out, but he was flung away. from the ShivaLinga, Lord Mahadev as Kalantaka (Ender of Death) appeared and hit Yama on his chest.

Markandeyaji was overjoyed and placed his head on Lord Shiva s feet. Mahadev blessed him with the boon of immortality. 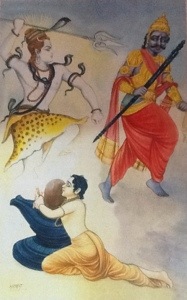