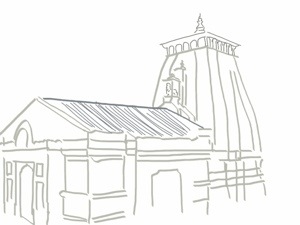 As Maha Deva was performing ‘Tapasya’ on the Mountains of Himalayas in the form of a Mahisha, He found Indra the King of Devas doing sincere penance at Gangadwara Kshetra, since the latter was dethroned from Sura Loka by the Demon Hiranyaksha and associates.

Siva appeared before Indra and asked him as to whom all among the Daityas should be submerged under water (Ke daarayami?). Indra named five of the most dangerous Demons, viz. Hiranyaksha, Subahu, Vaktrakandhar, Trishringa and Lohitaaksha. Siva in the shape of Mahisha destroyed the outer walls of the Demon’s fort, pulled all of them, drowned them underneath deep waters and killed them. He asked Indra to get back to Swarga and be the Ruler of Trilokas once again.

Bhagavan also materialised a Sacred ‘Kund’ (Pond) full of milk-like sweet water. Indra declared that whosoever drinks the water of the Kund with both palms together thrice would be blessed for three past generations; the left palm full of water would provide solace to mother-side ancestors, the right palm full of water to father-side ancestors and both the palms together would uplift the self.

Since Siva asked Indra: Ke daarayami, the Kshetra was called ‘Kedara’. Indra constructed a beautiful Temple with Kedara Linga as the highlight and all the Devas visit the Temple and worship Bhagavan and the Kund daily. The Kshetra is open for eight months from Chaitra ie from Meena gati Surya till Vrischika Sankranti and closes for the rest of the four months there would be no access to the snow-clad mountains during which time Siva is stated to shift to Haataka Kshetra from Vrischika Sankranti till Surya in Kumbha Rasi. Bhagavan further stated to Indra that when any devotee drinks the water of Kedara Kund and gives away Pinda daan to Pitras at Gaya would attain Brahma Gyan instantly and would be free from the cycle of births and deaths to attain Moksha.