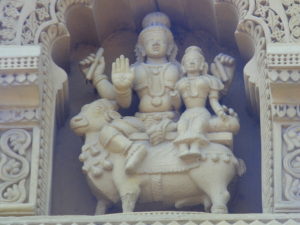 Suta Maha Muni narrated the birth- account of Nandeswara to the Rishis at Naimisha Forest. Maharshi Shilada approached Indra Deva to bless him to a highly renowned and virtuous son who would be ‘Ayonijam’ and ‘Mrityuheenam’ or unborn to a woman and deathless. Indra Deva expressed his inability and said:

(It is not possible for Brahma or Vishnu to grant a son who would be unborn to a woman and would not die). Maharshi Shilada then performed severe Tapasya for thousands of years and his body got degenerated to such an extent that it became a skeleton full of worms. Finally, Maha Deva granted his vision and Shilada’s wish:

(I shall grant you a son with the name of Nandi and he would be my son and would be popular like wise). Then Nandi was born at Yagna Bhumi with the features of Maha Deva himself with Trinetras, Chaturbhjas and as Jataa mukuta and Vajra-Sarpa dhaari when Devatas rained fragrant flowers, Apsaraas danced and Gandharvaas sang tuneful hymns in praise of Shiva and Nandi. Vasus, Rudras and Indra prayed respectfully and Devis like Lakshmi, Jyeshtha, Diti, Aditi, Nanda, Shachi, Bhadra and others rendered ‘Stutis’ to Nandi. Shailada Muni commended Maha Deva as well as Nandeswara and expressed his total satisfaction and gratitude. As Nandeswara was taken into the ‘Parnashala’ or thached home of Shailada, Nandi assumed a human Rupa instead of Deva Swarupa. Shailada Muni was overjoyed, performed the child’s Jaata Karma and other Vedic Tasks and on the son’s attaining seven years performed his Yagnopaveeta dharana and ‘Upaasana’ of Gayatri and tendered him to the Ashram of Maharshi Mitraavaruna. The Guru taught Veda Vidya, Shastras and other Scriptures, besides Dhanur Vidya, Ayur Veda and MantraVidyas, Chatushashti Kaalas, Ashrama Dharmas and so on. Mitravaruna was very proud of the student and so was Muni Shilada; the Guru then blurted at that time of Nandi ‘s exit from Ashram that doubteless Bala Nandi displayed extra-ordinary brilliance as a fulfedged Scholar and accomplishment but was shortlived! Shilada fainted at this disclosure for long and after regaining normalcy took to extreme Tapasya again to Maha Deva; even as Shilada was engaged in Tapasya, Shiva appreared, fondled Nandi, assured him not to get disturbed from what was stated by his Guru. He said that actually he sent messengers that Nandi’s life was almost over since his human birth would anyway be of Tapatrayas and hence he was terminating the Manava Janma to bestow Everlasting Life; by so saying, Maha Deva touched Nandi so that his physical body would fall down with his Jataa Mukuta etc and secure a permanent Rudra Rupa. The Place where the human form of Nandi’s ‘Jatajuta’ fell on Earth was materialised into a Sacred River called Jatodaka and Nandi’s new Form was of a ‘Vrishabha’; Parama Shiva himself performed ‘Abhisheka’ on the new Form of Nandi and that Place came to be called Vrishadhwani, Jambunada or Panchanada and Vishwakarma gifted a Golden Mukuta or Headgear and Kundalaas or Ear Rings. Thereafter Nandeswara familiarised with his mother Devi Girija and also the Ganaas, whom he was empowered as their Chief. Devi Parvati endeared the son who prostrated before her with veneration. Maha Deva declared to the Tri Lokas that Nandeswara was the son of Shiva and Parvati. Devas headed by Indra, Brahma, Vishnu , Dikpalakas, Maharshis, besides Yaksha-Gandharva-Muni and Yogi ganaas were all invited to a huge event where Nandeswara’s unique name was fame were known all over, where ever Maha Deva was known and indeed Maha Deva was acclaimed as the Supreme Lord of the Universe. Parama Shiva granted a boon to Nandeswara that He would be in the ‘Sannithi’ (Presence) of Shiva always and any kind of worship to himself would be incomplete without any Service to Nandi! Even great sins of the magnitude of Brahma hatya could be nullified by Shiva Puja but at first, Nandeswara should be propitiated without fail; Aadow kuryaanamaskaaram tadantey Shivataam Vrajet/