As Tamra returned without result that the three initial methods of Sama, Dana and Bheda did not yield results, the Danavas got the firm reply that war was imminent. But one elderly Statesman among the Danavas, Vidaliksa expressed the concern that by taking advantage of the loophole in the boon given by Brahma to Mahisha of not getting killed by any species excepting by a female should cause concern; it might well be that by placing Her ahead, Devatas might kill Mahisha! Durmukha said that whatever might happen the situation was of no return and they have to fight out without showing their backs any way. Vaskala bragged that when the entire Deva army including Brahma, Vishnu and Rudra had retreated and collapsed, why should one think and plan strategies at this late stage; this is an hour of action and not of precious- little- do- nothings and thus therefore was high time for action! As an initial step in the battle, the two Demons-Durmukha and Valsala- once again used the catch phrase of Devi’s romance with Mahisha. Maha Devi got infuriarated, lost patience that She displayed for long and fired five arrows against Vaskala to start with. When he took up his club aloft, She hurled her own club and smashed his head to death. Her action was so swift that Durmukha’s reflexes did not work for a while as there were shrill shouts of Victory to Maha Devi and after regaining some composure Durmukha reacted with his arrows and bow. Meanwhile Maha Devi rained piercing arrows all around and hundreds of Danava heads rolled all over and Durmukha’s chariot was shattered. As he jumped out and hit Devi’s lion with his club, She cut his throat with Her axe. There were screams of happiness heard from Devas, Gandharvas and Kannaras as also Great Sages and Siddhas from Earth. As the armies of Vaksala and Durmukha ran for their lives and fled back to convey the killings of their masters, Demon Mahisha got a shock that two great warriors had succumbed to death and that was unbelievable indeed. His General Chiksuraska,a Danava of never-ending cruelty and intense loyalty to Mahisha leapt from his seat and shouted with rage that the Devi would be destroyed for sure. He took Mahisha’s permission to shatter that Woman and bring her back to Mahisha dead or alive. Demon Tamra too accompanied the General. The moment he entered the war field, Chiksuraska kept on shouting at Devi that he had arrived to avenge the death of Vaksala and Durmukha and bombared with arrows, spears, maces, sharp swords and a lashing tongue. Tamra went near Bhagavati and hit the lion on its head with an iron ‘musala’ (club) when Devi was provoked and hurled Her axe with dashing speed as the Demon fell, turned around and tried to throw his musala but took the last breathing. The General Chiksaruska started screaming with rage and flew across to reach Devi who pierced with Her spear through his body. The entire army ran for their lives in the same direction that they arrived. Asiloma and Vidalaksa were the two top Demons who not only had valour and might but were well versed in war tactics and diplomacy too. In fact these two were in the inner ring of Mahishasura’s court and get rarely provoked but could call a spade a spade always counselling their King Mahisha about the pros and cons of a given situation. Asiloma addressed Devi Bhagavati and asked Her as to why She had been killing Danava soldiers recklessly without least provocation, excepting request Her fair hand in wedding to their master. Was it a sin to ask Her for Mahisha’s wedding? After all She could simply say ‘no’, but why this carnage? Maha Devi replied to the calm reasoning put forth by Asiloma: ‘I have no desire nor hatred. I stand for ‘Dharma’ and ‘Nyaya’ (Virtue and Justice). Your King had perpetrated endless sins of severe nature and interfered with the natural way of human life and destroyed all norms of decency. He had hurt Devas, Indra and Trinity. Having secured boons from Brahma, he had harmed Brahma Himself and thus proved to be an ungrateful demon who should never be excused. I am the Origin of the Universe- The timeless, featureless, sexless, and faultless Super Energy without fear or favour. Mahisha’s consience is impure and had been wanting to marry Me; this is clear that he had no sense as he had been posseesed by high degree of Maya.’ Thus explaining in an impassioned manner, She advised Asiloma and Vidalaksa to retreat to ‘Patala’ but both of the Demons decided to die while fighting rather than betraying their Master. Knowing fully well that Maha Bhagavati would kill them any way, they wished rather to get killed valiantly on the battle field than show their backs. Maha Bhagavati had fully acknowledged the maturity of their thinking and felled both of them after their waging a brilliant battle. 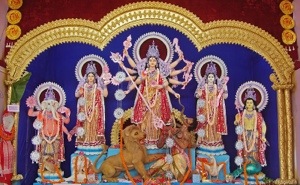