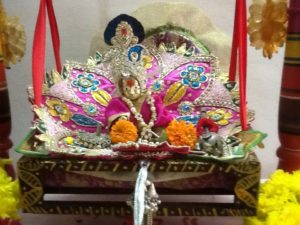 The transfer of Lord Krishna from Mathura to Gokula by Vasudeva was a mystery. A heavenly voice was heard that Vasudeva should hurry up to Gokula, that the heavy gates were all opened, the strong force of guards were put to slumber, the River Yamuna which was in spate under a spell of cyclone would give way, he should deposit Devaki’s Krishna on the bed of Yashoda (while Rohini would have already given birth from Lord Balarama) and pick up the female child back to the prison in Mathura as though nothing happened as Kamsa would visit the prison to throw away the female child of Yashoda to skies which warned that indeed the eighth child of Devaki was safe elsewhere to kill him eventually. The frightened Kamsa despatched his associates to locate and destroy the child one by one including Putana, Baka, Vatsa, Dhenuka, Pralamba, Sakata, Kesi and so on. It was a sport for Krishna and Balarama to terminate the many Demons thus sent by Kamsa. As time passed, the miracle acts of Lord Krishna included the punishment to the mighty and poisonous serpent Kaliya ; the lifting aloft of the Govardhana Mountain by a little finger; the ‘Vimochana’( Relief) of a curse by Narada to the two sons of Kubera viz. Nalakubara and Manigreeva who converted as tall trees Yamala and Arjuna in the backyard of Nanda as mother Yashoda tied Him to a grinding stone placed in between the trees since he was highly mischievous; and finally the opening His mouth to Yasoda as He was eating pebbles and sand and demanding His mouth to be opened wide only to witness the Whole Universe in it.

As though his final days drew near to his end, Kamsa sent Akrura to Gokula to invite Krishna and Balarama to Mathura. On their entry into the City there was an enthusiastic welcome to the heroes of Gokula by onlookers- men, women and child. They broke the bow ‘Indra Dhanush’ easily, killed Kuvalayapidana the ferocius elephant, put an end to the powerful wrestlers Chanura, Mushtika, Sala and Tosala and finally shattered Kamsa with ease. The parents were released from prison and installed the maternal grand father Ugrasena back to the throne. Thread Ceremony was performed to the two boys who having taken the vow of celibacy moved into the hermitage of Muni Sandipana to learn Vedic knowledge, martial arts, Artha (Finance) and Administrative skills for twelve years, returned to Mathura. Kamsa’s father-in- law Jarasandha tried to kill Krishna and Balarama in seventeen battles and they were able to resist the high and mighty opponent mostly by mental alertness and planning. Jarasandha engaged Kala-Yavana (the Black Yavana) of Mlechyas of foreign origin whose warriors far outnumbering those of Mathura were ruthless and sinful not used to the Regulations of ‘Dharma Yuddhas’ or Disciplined Battles, terrorising innocent men, women and children alike. Krishna led Kala Yavana into a cave where Sage Muchukunda was in deep slumber for centuries and mistaking him for a false and wily Krishna Himself kicked Muchukunda, who got the boon from Indra that who ever woke him up by force would be burnt off. Thus cleverly getting rid of Kala Yavana, Krishna got rid of the menace of Jarasandha till he was killed in a duel with Bhima of Pandavas as Jarasandha was destined to die in Bhima’s hands. But before Jarasandha’s end, he kept on tormenting Yadavas as Krishna’s killing Kamsa was never forgotten. Thus Krishna and Balarama decided to create another place Dvaraka as a beautiful port City which was constructed afresh by Visvakarma the Divine Architect. Having shifted to Dvaraka from Mathura, Yadavas and allies had a comfortable and peaceful time.Meanwhile, Lord Krishna desired to marry Rukmini and vice versa but her powerful brother Rukmi who hated Krishna since he was in the camp of the deceased Kamsa, Sisupala and Jarasandha, preferred her marrying Sisupala instead. At the time of her marriage with Sisupala, Krishna eloped with Rukmini defeating the armies of the friends of Rukmi. In course of time, Krishna acquired seven other queens viz. Jambavati and Satyabhama in the context of winning Syamantaka Jewel and the rest of them viz. Kalindi, Mitravinda, Lakshmana, Bhadra and Nagnajiti.

Rukmini begot Pradyumana and at his name-giving ceremony just ten days of his birth, Danava Sambara stole the child and threw him away in a sea knowing the boy was Krishna’s son. The child was devoured by a big fish and a fisherman gifted the fish to Demon Sambara again, who in turn gave it to Mayavati the cook in charge. As the fish was cut, a crying infant was seen and Narada who appeared there to give the link of her earlier life as Rati Devi, the wife of Manmadha and the infant in the stomach of the fish was Manmadha himself! After opening the third eye which burnt Manmadha, Lord Rudra was upset about the interruption of His meditation since the Demi-God of Love despatched flowery arrows on Lord Rudra to notice Parvati Devi who was at that time worshipping Him being desirous of marrying Him so that the end result should be the birth of Lord Muruga who only could destroy the Demon Taraka! When Rati Devi wailed that the cause of Universal Benefit took away her husband’s life, Lord Rudra appreciated the situation and gave the boon of Manmadha’s rebirth as Pradyumna the son of Krishna and Rati Devi herself as Mayavati. Indeed, whether Lord Krishna was aware or not of the past, present and future but surely was covered up by ‘Maya’ and cried incessantly and addressed Maha Maya through sincere prayers that She should kindly restore his missing son Pradyumna soon. Maha Bhagavati Maya appeared and assured that Danava Sambara stole the child and would be restored when Pradyumna attained the age of youth. King Janamejaya raised a very pertinent question to Veda Vyasa as to how Lord Krishna being the incarnation of Maha Vishnu Himself had to pray to Maha Maya Devi to ascertain the where- abouts of His son! Veda Vyasa explained that once a human life is assumed the qualities of human beings are bound to be acquired automatically even to Incarnations more so because of the cover of Maya. Qualities like hunger, thirst, sleep, fatigue, fear, kindness, anger, pride, pleasure, pain, disease, old age, death are the natural phenomena of each and every human. Lord Rama in a far earlier incarnation too was ignorant of whether He had to go on forest life on the eve of His becoming the heir apparent; whether Lady Sita fancied for the golden deer and Rama left running to fetch it and lost sight of Sita from the hermitage since Ravana abducted her; whether on return to Ayodhya as Emporer Rama had to banish her on the flippant words of a washerman! Such were the situations that even ‘Avatara Purushas’had to go through once they were made as human beings. Similarly, Lord Krishna had to face the instant event. Indeed Maha Devi’s supremacy is eternal and undisputed!