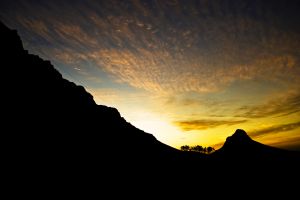 Once during Narada’s travels, he came to Vindhya mountains. Vindhya worshipped Narada. Narada told Vindhya that Mount Meru is superior. Meru stands so tall that the Sun shines on his peaks. Kailas, the abode of Lord Shiva is at his feet. You are so simple and humble. Can you be great ? Vindhya initially did not get jealous, but Narada left him pondering, asking him not to take anything to heart.

Vindhya was now taken over by jealousy. wanted to prove that he was in no way lesser that Meru. He started worship of Lord Shiva to become greater than Meru. Vindhya practiced severe penance and worshipped parthivlinga along with Lord Omkareshwar for nearly six months. As a result Lord Shiva was pleased with him. On a request of all the gods and the sages Lord Shiva made two parts of the lingas. One half is called Omkareshwara and the other Mamaleshwar or Amareshwar. Lord Shiva gave Vindhya the boon of growing, but extracted a promise that Vindhya will never be a problem to Shiva’s devotees.

He started growing higher and higher by his power of prayers. However, he soon forgot his promise. AS he grew to heights, he grew proud. It even obstructed the sun.

Jealousy and Pride were the root cause of Vindhya’s behaviour. The Gods went to Agastya Rishi, and requested him to solve the problem. Agastya Rishi through his wisdom agreed, and went to Lord Shiva for blessings. Agastya Rishi asked Vindhya for passage to go south. Vindhya refused. Agastya rishi prayed to Lord Shiva, grew his hand till it reached Vindhya’s peak, and pressed the peak with such enormous pressure that the earth gave way and Vindhya went right down. Vindhya asked Agastya rishi for forgiveness. Agastya told Vindhya that he would not grow until the sage and his wife returned from Dakshina Kashi. Vindhya obeyed.