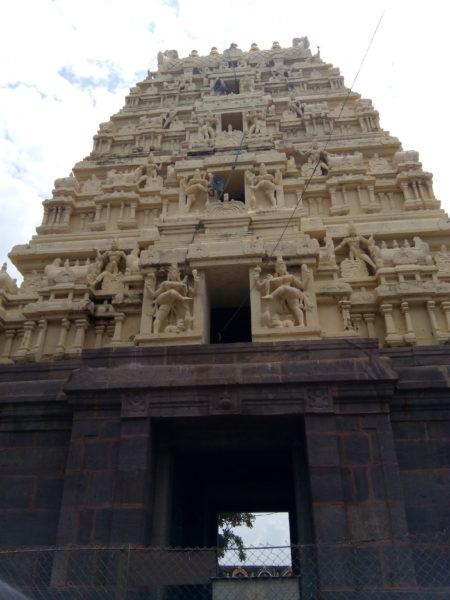 Besides the main shrine and the minor shrines in the large temple complex. Srisailam is the hallowed place for a number of sites for prayer, worship and other rituals. Some of the main ones are:- Paataalganga A dip in the holy Krishna is customary. Several hundred steps from the temple lead you hundreds of metres below to the gorge where a holy dip affords spiritual cleansing. If the descent to the river and the subsequent mounting of the steps on return is too taxing, recourse can be had to the ultra-modern ropeway cable car service operated by the Andhra Pradesh Tourism Development Corporation nearby. It takes you to a jetty below with panoramic views on the ways down and up of the cliffs, forests, dam, river, gorge and temple. A short boat ride at river level can be had in a motor launch in the calm waters of the dammed Krishna, where offerings of lit deeyas and flowers along with haldi and kumkum can be made to the river goddess Krishna by married women, with the deeyas being left to float on the river surface. AkkaMahadevi Caves A motor launch service from the point described above takes one regularly to the caves where the ascetic saint AkkaMahadevi did penance and took Samadhi in a banana orchard. The caves are on an uninhabited thickly forested island some hours away by ferry boat. Sakshi Ganapathy At the entrance to the main shrine is a temple consecrated to Lord Ganapati. He is said to bear witness to each and every pilgrim who visits the main shrine, which is after all consecrated to His Parents. Paal Dhara, Panch Dhara A steep valley from a surface road nearby takes one to the holy spot where Adi Shankara did penance and composed the Sivananda Lahiri. On the way down, we begin to understand the name Paal Dhara (stream of milk) and Panch Dhara (Five Streams). The streams of water at the bottom of the valley gush out in numerous streams of milky flows. Shikharam At Sikharam, the highest of the Srisailam hills, is Sikhareswara Swamy, another temple dedicated to Lord Shiva. As its name suggests, this is the summit of the pilgrim spots. Atop a huge pedestal is the imposing Nandi bull between whose cocked ears each pilgrim aspires to have a view of the main Srisailam shrine below. So liberating is the view of the temple from here that a famous Sanskrit shloka refers to the utter certainty that one view of Srisailam from the Shikharam ensures no rebirth to the pilgrim viewer. Tiger Reserve and Sanctuary Srisailam also boasts of one of the largest tiger reserves in India. The sanctuary covers an area of 3568 km². The terrain which is rugged sliced by winding gorges is covered by dry deciduous forests with scrub and bamboo thickets, providing a habitat to a range of animals like the tiger, leopard, deer, sloth bear, hyena, jungle cat, palm civet, bonnet macaque and pangolin.