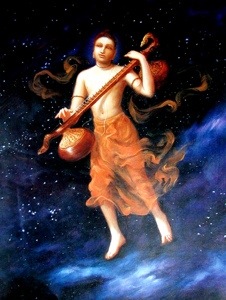 Maharshi Narada visited ‘Samyapraksha’, the Sacred Hermitage of Maha Muni Veda Vyasa on the banks of River Saraswathi.The two Grand Sages exchanged mutual experiences and the inevitable play of ‘Maha Maya’ (The Great Illusion) in their own lives. Veda Vyasa narrated the incidents of his past including the role played by Devi Bhagavati Maya as to how his father was enticed with his mother Satyavati-a fisher woman, the insistence of his mother to sleep with his own younger dead brother’s wives to beget children to uphold the family royalty, his temptation with Apsara Grithachi and the birth of Suka Muni, his extreme attachment with the son and the intense desire to be a family man even at the cost of sending him to ‘Videha’ King Janaka to brain wash the son to wed and the most painful feeling of his son’s loss when he died and so on. Maharshi Narada recalled too of his own unforgettable memories of wedding who had been a confirmed Brahmachari (Bachelor) and, worse still, becoming a woman and as a wife with children and grandchildren!

Narada (‘Nara’ is Knowledge and ‘Da’ means Giver) was a ‘Loka Sanchari’ or Universal Tourist by virtue of a curse given by Daksha Prajapati as Narada interfered with his sons-Haryasvas; Whereas Daksha asked the sons to learn and meditate well and then become ‘Grihasthis’ or House holders later but Narada guided them to perform ‘Tapasya’ and be eligible to salvation instead of getting mixed up with worldly activities.Hence the curse. Such a legendary personality- a Brahma Manasa Putra or born of Lord Brahma’s mind- fell flat due to the powerful intentions of Maha Maya. In one incident, the two Devarshis Narada and Parvata fancied to visit Bhuloka and visit various Sacred Places and Rivers. Having gone on the pilgrimage, they had to stop over at the Kingdom of King Sanjaya as their movement for four months had to be halted due to the season of rains.The King made all the arrangements for their comfortable stay and also asked his youthful daughter Damayanti to oversee their needs of daily regular pujas. In course of time, Damayanti got atrracted by Narada by his erudite knowledge of Scriptures, his eternal youth and most importantly by his Sama Veda intonation as well as his musical talents, especially his excellent playing of Veena ( lute) instrument.There was a distinct attitudinal change of Damayanti towards Narada vis-a-vis Parvata which was not to the liking of the latter. He asked Narada whether there was any fascination for each other and he confirmed it. Parvata became furious as this was not the purpose of their coming to visit Bhuloka and the result was loathsome. Thus, Parvata left Narada’s company and cursed him to have a monkey face. King Sanjaya and wife sought to hurry up with Damayanti’s wedding but she was adamant to marry Narada only as she was infatuated with him, despite his face.He was an adept in the Science of Music, a virtual Nada Brahma and an authority of Swara, Grama and Murchchana. Sapta Swaras: Sadja, Rishabha, Gandhara, Madhyama, Panchama, Dhaivata and Nisada. Gramas are the gradual increase and decrease of Swaras; Mruchchanas: intonations and regulation of sounds by controlling the air and harmony through keys, changing keys for sound modulation and creating melodies] Damayanti also felt that after all Kinnaras the celestial musicians had horse faces and Narada was admired for his innumerable other qualities. Narada and Damayanti were married and were extremely happy. After a lapse of time, Maharshi Parvata visited Narada couple, withdrew his curse and Narada became normal again. Such was the play of Maya and strange were the ways of destiny which was a part of Bhagavati’s ‘Leelas’ never understood by Trimurtis, not to mention of Narada!

Devarshi Narada narrated another example of the pastime of ‘Maya’ to Veda Vyas which was even more telling. As Lord Vishnu and Narada were conversing once at Vaikuntha, Narada was proud to make a statement that happily he was not a victim of Maya as he was beyond it but human beings often get victimised to it. Lord Vishnu called for His Vehicle Garuda and suggested that both could go out for a drive. He stopped Garuda at the City of Kannouj near a lake, suggested that they might refresh with a swim and asked Narada to do so first. The moment Narada dipped in the water, Narada became a charming woman and lost his memory. Vishnu left quietly along with belongings like Narada’s clothes, lute and hand worn musical instruments. Meanwhile, King Taladhvaja of Kannauj arrived there with his followers and was immediately struck by the beautiful lady (Narada) and enquired about her name and details. As the woman did not remember her antecedents, the King took her and married her in the presence of all according to Vedic rites and named her Sowbhagya Sundari. The King declared her as the Principal Queen and their marital life was exceedingly successful as they begot twelve sons who grew and were married too and she became a grand mother. As there was a terrible war with a neighbouring country, the sons and grandsons of the King were killed but the he did not fight. An elderly woman well versed in Vedas and Mantras provided solace to the Queen and suggested that after the obsequies she might take bath in a ‘Pumthirdha’ for males as the departed were all males. The elderly woman, who was Vishnu Himself conducted the Queen to the lake and even after one dip realised that she was Narada himself! As the King was wailing about the whereabouts of the Queen, the elderly lady or Vishnu consoled the King and sent him back and had a hearty laugh to Narada who was put to shame as this was a pastime for Devi and Lord Vishnu was but an instrument in the entire drama to prove that none whatsoever was above ‘Maya’!Thus both Maharshi Veda Vyasa and Devarshi exchanged mutual experiences in the context of Maha Maya who rejoices, like a magician in making dolls dance as per Her will and pleasure, and plays with all living and non living beings from Lord Brahma to an insignificant pebble. She casts Her spell to the objects according to their ‘Karma’ and as per the mix of their own ‘Gunas’ in various proportions. The Basic Laws prescribed by Maya Bhagavati are enforced by Her Three Agents, viz.Trinity and their deputies and the actions are perfomed by the individuals concerned according to their volitions which are again conditioned by their remote past, immediate past and current accounts of ‘Karma’!