Having given the gist of the Foremost Manu Swayambhu, his illustrious descendant Privavrata who ruled Sapta Dwipas, especially Jambu Dwipa of which Bharata Varsha was an important component, Markandeya narrated the memorable sequence of events leading to the birth of Swarochisha Manu. 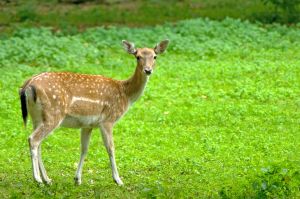 Having enjoyed life with happiness for six hundred years, Swarochi became a proud father of Vajaya from Manorama, Merunandana from Vibhavari and Prabhasa from Kalavati. With the help of the ‘Padmini Vidya’ which he learnt from Kalavati, Swarochi made his sons the Kings of their own Territories. He went on a hunting spree once and found a female deer being chased by a boar; the King decided to kill the boar but the deer requested him to kill her instead. The King declined to kill the deer as she was defenceless, but she entreated him for mercy killing as she could not secure a virtuous husband in life; when the King asked her to divulge whom would she desired to marry, she replied coyly that she yearned for the King! Swarochi said that it was not possible to do so, then she asked him to embrace her once and he would then see the miracle because the ‘Vanadevata’ or the Deity of the Forest requested it to do so. The King embraced the deer and the deer got pregnant and instatnly delivered the memorable Swarochisha Manu, – the second in the Series, when celestial drums were sounded, a heavy fall of scented flowers rained, Gandharvas sang mellifluously and played musical extravaganzas and ‘Apsaras’ danced with ecstacy.