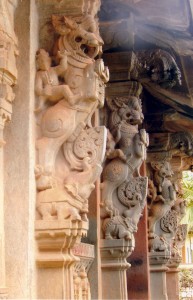 The associations of a number of creatures, non-human, divine, mythical, notional/abstract or animal with Lord Shiva is noteworthy. He is seen as Time (Kaal or Kaalkaaleshwar) in whose dimension events are played out, living creatures take birth, live their lives, die, and are transformed to be born again. He is seen as having manifested Himself as Adi Sankara, who gave Hinduism new life. Lord Hanuman, the Simian God is regarded as the eleventh manifestation of Lord Shiva. Indeed, the Lord of All Creatures, Pashupati, is but another of the appellations of the Lord. Interestingly, the mythical creature, Yali, who is sculpted on the walls and pillars many South Indian temples (e.g. at the shaktipeetham, Devi Meenakshi Temple at Madurai) has also been identified with Lord Shiva. The Yali is a leogryph, a lion-like legendary creature.

The Yali is also called Vyalam or Sarabham in Sanskrit, with Lord Shiva in this form being identified as Sarabhesvara in the language and as Yaliappar in Tamil. While references to the creature are ancient, its depiction is more recent, with South Indian temple sculpture of the last 500 years bearing evidence of this.

The Yali is seen as the guardian of sacred space or a refuge. It is depicted with the head of a lion, a body of a cat, the tusks of an elephant and the tail of a serpent. The creature is seen as more powerful than each of the animals making up its parts. Enigmatic and graceful like a cat, dexterous and venomous like a snake, mighty and brainy like an elephant, and fierce and aggressive like a lion – these are the attributes of a Yali.

Shaiva accounts speak of the Narasimha avatar of Lord Vishnu, half-lion and half-man, who manifested Himself in a cosmic rage so terrible (in order to annihilate the wicked Hiranyakasipu and save and bless the saint prince, Bhakt Pralhaad) that the only Being that could pacify and contain Him was a composite of the main creatures of the animal kingdom, prompting Lord Shiva to take the form of Sarabheshwara or Yali, thereby successfully absorbing the lion-man unto Himself.