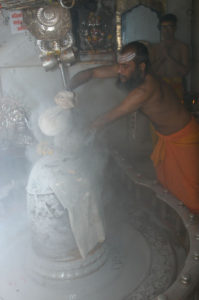 Bhagavan Shiva analysed the significance of Bhasma which was product of Agni Karyaas like daily homas and Yagnas; the burning of ‘Sthavara Jangamaas’ by Fire would result in Ash:

(Uttama Bhasma is produced by the scorching of the wood of trees and other materials of Nature. Shiva stated that by way of Bhasma, he carried his virility to human beings. Bhasma generated by Agni Karyaas while reciting the Mantras like ‘Triyaamshu’ is basically is the bye-product of Shiva’s ‘veerya’ and demolishes all kinds of Sins. This ‘bhasita’ or the radiant product emerges from Shiva’s Body and is responsible for the Bhakshana of Mahaa Paapaas and hence it is called Bhasma . Mahadeva futher explained that the word ‘Ushmapa’ or hot and burnt material is ‘Pitreeshwar’ or the material consumed by the Lord of Pitraas, while Devataas consume Amrita or Soma Rasa; Agni is of Soma Swarupa; Shiva is Agni and Soma rupi is Devi Ambika; Shiva is Purusha and Ambika is Prakruti. This is the reason why Bhasma is called Shiva’s veerya as his Veerya is generated from Shiva’s body. Thus Bhasma destroys Evil and Inauspiciousness / ‘Ashubha’ anywhere especially in households; any person taking a bath and applies Bhasma is stated to be eligible for performing the Sacred Paashupata Vrata Kapila Yoga and is assured of Bandha vimochana or the shackles of Samsara to Shiva Loka. If a person resorts to Bhasma Snaana and performs Shiva Dhyaana, then thousands of ‘Akaryas’ or misdeeds get destroyed like Agni burns off immoralities and turpitude. Application of Bhasma after Snaana and Shiva Dhyaana three times a day would fetch ’Gaanapatya’; if that person performs Shiva Worship at Smashaana or burial grounds along with the observance of the above deeds viz. Pavitra Snaana-Bhasmaalankarana-Shiva Dhyana and worship thrice daily would secure Ashta Siddhis of Anima-Garima, Vasitya etc. Performance of Kamika Vrata and Pashupata Vrata before Shiva Linga without the impact of Shadvagraas, Rajo-Tamogunaas and perfect equanimity besides the prerequisites of Snaana-Bhasma-Dhyana- Puja-Naivedyas etc. would qualify Kalpaanta Rudra Prapti. Maha Deva further stated that He had originally scripted Srishti without Lajja (Shame), Moha (Attachment), Bhaya (Fear) and such aberrations. Even now all Beings including Devas, Munis and human beings are born naked since no person could become Jitendriya, since features like Kshama (Forgiveness), Dhairya (Courage), Ahimsa or Non-Violence, Vairagya or Other-Worldliness constitute the most superior Vastras. Thus any mocking, criticism, protests and curses against Mahatmas and Siddhhas caused by Ahamkara (Ego) and Ignorance would tantamount to ‘Maha Paapaas’ attracting the wrath of Maha Deva even against Saptarshis who were cursed back by him, while their curses against Shiva proved to be boons to the Universe since Shiva Lingas were manifested for promoting Bhakti in the Trilokas as sure means of Shiva Prapti.