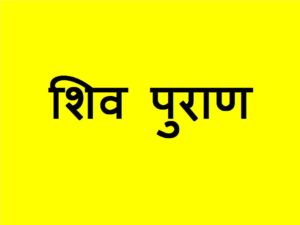 The virtue in reading Vedas in Gurukulas or under the tutorship of a Preceptor by way of eating ‘Kanda Moola Phalas’ or uncooked vegetables, roots or raw fruits is not even half of the positive benefit attained by reading or listening to Puranas, especially Siva Purana. The knowledge of Puranas is stated to be as significant as the heat and light of Sun God or the coolness and tranquility of Moon God. Puranas open up wide windows and doors to the Spiritual World, destroy ignorance, illuminate vistas of knowledge and enlighten about the happenings of the Past, guide about the Present time’s do’s and don’t’s and warn or caution about the customary pitfalls and traps that ought be avoided in future.. That is why Purana ‘Sravana’, or ‘Pathana’ or ‘Manana’ is an integral part of enlightening of human psyche. Whether it is about the gains of illustrious persons in the past, the vision of Rishis, the ways of the virtuous and of the evil forces, the sacrifices of the committed persons, the vindication of Truth finally, the bench mark attainers among the Sages and Devotees and the exemplary actions of Avataras (Incarnations) prove again and again that The Super Power Himself or Herself does exist. The methodology of devotion to Almighty, the secrets of the Universe, Creation, Preservation, Destruction, Planets, Concepts of Time, Tatvas, and so on are all included in the Puranas. In special reference to Siva Purana, all these aforementioned aspects plus several special features of Siva Gyan ranging from ‘Abhishekas’ to ‘Archanas, Worship to Sayujya, Parthiva Lingas to Dwadasa Jyotirlingas, Austerities to Attainments, Aspects of this world one lives in and of those other worlds, about virtues and evils, and the Final Truth of Existence. Yat punyam Sarvadaaneshu Sarva Yajgneshu va Muney /Shambhoh Purana Shravanaath phalam nischaya bhavet/ Viseshatah kalaou Vyasa Purana Sravanarthey / Paro dharma na pumsam hi mukthidhyana para smrita /Purana Shravana samkeerthanam tadha kalpadruma phalam ramyam manushyaanaam na samsayaha (The fruits of various charities and performance of Yagnas are as good as hearing Siva Purana for sure. In Kalyug especially, Purana Shravana is considered as a better alternative than even charity or other routes). Being aware that human beings anyway tend to ignore the traditional ways of worship like yagnas and so on, Bhagavan Siva has prescribed that listening to Siva Purana and about Siva Leelas would be as good a route to achieve the Four ‘Purushardhas’ viz. Dharma (Virtue), Ardha (Prosperity), Kama (Fulfilment of Worldly Desires) and Moksha (Salvation).