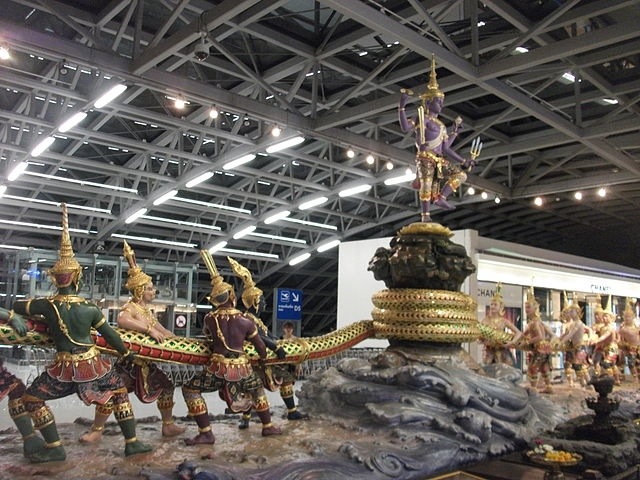 Millions of years ago,
the most powerful beings in the universe,
inspired by the Supreme Lord,
united to perform an astounding feat

The Srimad-Bhagavatam relates how, many millions of years ago in the heavenly planets of this universe, a fierce battle for supremacy was raging between the devas (demigods) and the asuras (demons). The demons were headed by Bali Maharaja, a descendant of the great demoniac king Hiranyakashipu. Lord Indra, the king of the demigods, had committed an offense against the great sage Durvasa Muni, who then cursed the demigods to become poverty-stricken. The demigods became bereft of all influence and strength, their lives lost all auspiciousness, and in due course they were defeated by the asuras. The demigods then appealed to Lord Visnu for help.

The Supreme Personality of Godhead told them to make a truce with the demons. The Lord suggested that they work together to churn the ocean of milk to produce the nectar of immortality, which could be distributed equally among the devas and asuras.

Lord Visnu always protects the righteous demigods, and He wanted to stop the demons from expanding their influence all over the creation. Lord Visnu told the demigods to follow the logic of the snake and the mouse in dealing with the demons. A snake and a mouse were once caught in a basket The snake said to the mouse, “Look, I could eat you very easily, but it’s more important for me to get out of this basket. So why don’t you make a hole so that we can both escape?” The mouse agreed and started working. But as soon as the hole was big enough, the snake ate the mouse and came out of the basket.

The Lord had no intention of giving the nectar to the demons, because they were crooked and troublesome, and to distribute the nectar to such persons would be unwise.

“There are two kinds of created beings.” Lord Krsna says in the Bhagavad-gita. “One is called divine and the other demoniac.” Srila Prabhupada comments that those who are born with divine qualities follow the injunctions of the scriptures and obey the Lord and His representatives, whereas others act according tokumbh their whims to satisfy their own senses.

Following the instructions of Lord Visnu, the demigods approached the leaders of the demons, and an agreement was reached, after which they all left for the ocean of milk to start the churning. Lord Visnu helped them by carrying Mandara Mountain on the back of Garuòa, His eagle carrier. When they arrived at the ocean of milk. He placed the mountain in the middle of it. The mountain was to be used as a churning rod. Then Garuda, because of his enmity toward snakes, was requested to leave so that Vasuki, who is honored by the devas as Nagaraja, “the king of the serpents,” could come and be used as a churning rope.

The demons insisted that they should hold the front part of the snake during the churning, while the devas, on the encouragement of Lord Visnu, held its tail. As they began pulling the “rope” to produce nectar, smoke and blazing firekumbh emanated from Vasuki’s many mouths, causing great suffering for the asuras.

As the demons and demigods continued churning, the huge Mandara Mountain began sinking into the ocean of milk because it was without support. The Lord then took the form of a tortoise, entered the ocean, and held the mountain on His back to allow the churning to continue. It is described in the Srimad-Bhagavatam that the tortoise, known as Kurma-avatara, accepted the turning of the mountain to scratch His back and thus felt a pleasing sensation.

The churning of the ocean first produced a poison that spread in all directions. TSivahe demigods became afraid and sought the shelter of Lord Siva. Being compassionate. Lord Siva gathered the poison in his palms and drank it. He held it in his throat, and his neck became marked with a bluish line, which is now considered an ornament of Lord Siva, who is known as Nilakantha, “one who has a bluish neck.”

While Lord Siva was drinking the poison, some of it fell from his hands. Various plants, scorpions, cobras, and similar creatures drank those drops of poison and thus acquired their venom.

After the poison, different opulent items were produced, and these were distributed among the members of the two churning parties. First a surabhi cow appeared, and she was taken by the great sages. A white horse named Uccaihsrava was produced, and it was taken by Bali Maharaja. When Airavata, the king of elephants, was generated, Indra took it for himself. The Kaustubha-mani, the most valuable gem, appeared and was offered to Lord Visnu to decorate His chest. Then came the Parijata tree, which was offered to the devas.

Next the apsaras, beautiful women dancers who entertain in the courts of the demigods, were produced, followed by Laksmi the goddess of fortune, who preferred to become the consort of Lord Visnu. Then came Väruni, the goddess of liquor, and the demons took possession of her. The ocean also produced Balacandra, the crescent moon. Because of its cooling effect, Balacandra was offered to Lord Siva to wear on his head, since he was feeling dizzy from having drunk the poison. Then a conch shell named Pancajanya and a bow named Haridhanu (“the bow of Hari”) appeared and were taken by Lord Visnu.

Finally, a vdhanvantaraery wonderful male person appeared. His name was Dhanvantari. In his hands he carried the amrta-kumbha, a jug filled to the brim with nectar. Before the appearance of the nectar, for which the demons and demigods had been working so hard, there had been no disputes. But upon seeing Dhanvantari holding the jug of nectar, their most cherished object, they all lost self-control and patience. The demons immediately snatched the pot away by force, and a fight ensued.

According the Skanda Purana, at one point during the fight, Jayanta, the son of Indra, took the pitcher and ran away toward the heavenly planets. The demons followed him there, and the fierce fighting continued.

From time to time. over a period of twelve days of fighting, some of the nectar was spilled, and it fell on four places on earth: Nasika, in Maharashtra; Ujjain, in Madhya Pradesh; and Haridwar and Allahabad, in Uttar Pradesh. A day in heaven equals one year on earth. Therefore, to commemorate the auspicious dropping of the nectar on earth, festivals, or meläs, are held at each of these sites once every twelve years. The same nectar still comes to these sites during certain planetary configurations. Even today millions of people come to partake of this nectar, or amrta, to become immortal by bathing in the holy rivers and drinking the sacred water. At Nasik, the pilgrims bathe in the Godävari River; at Ujjain, in the Ksipra; at Haridwar, in the Ganges; and at Allahabad, in the confluence of the Ganges, Yamunä, and Sarasvati.

The asuras finally defeated the devas and carried off the pot of nectar, leaving the devas morose. The Lord told them, “Do not be aggrieved. By My own energy I shall bewilder the demons by creating a quarrel between them. In this way I shall fulfill your desire to have the nectar.”

Soon after, the demons began quarreling among themselves over who would get to drink the nectar first While they were fighting. Lord Visnu assumed the form of an extremely beautiful woman, known as Mohini-murti. When the demons saw the beautiful features of Mohinidevi, who was glancing at them and slightly smiling, they were all completely enchanted. The beauty of the form assumed by the Personality of Godhead surpassed the beauty of the goddess of fortune. The demons, completely overwhelmed by Her charm, asked Her to serve as an arbitrator. She accepted the position on the condition that no one would oppose Her or protest against whatever She would do or say.

The asuras agreed and handed the amrta-kumbha over to Her, requesting Her to distribute it. Although they had easily snatched the pot from DhaMohininvantari and were in a position to keep it for themselves, they stupidly lost it, being bewildered by the Lord’s incomparable, genuine beauty. Mohini-murti Herself had even openly warned them of the trick.

Mohini-murti made the devas and asuras sit in separate lines, and She delivered the nectar to the demigods while speaking sweet words to the demons. One demon, named Rahu, understood Her trick. He dressed himself like a demigod, sat down in the line of the demigods, and received the nectar. The sun and moon detected him and disclosed his identity to Mohini-murti, who immediately took up Her disc, which is razor-sharp, and severed his head before he could swallow the immortal beverage. Although his body from the neck down died, his head remained alive because of the nectar in his mouth.

After giving the nectar to the demigods, Mohini-murti revealed that She was Lord Visnu. The Lord then returned to the spiritual world on the back of Garuda.