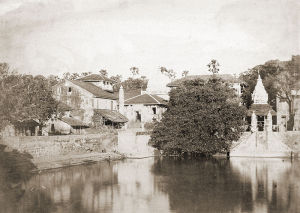 The Walkeshwar Temple is situated on on Malabar Hill next to the Baan Ganga Tank.

It is believed that Lord Ram paused here on his way from Ayodhya to Lanka in pursuit of Ravana. Lord Rama was advised to worship Shiv linga and he is said to have constructed the original linga of sand, after getting tired of waiting for his brother, Lakshman to bring an idol. Walkeshwar is derived from “Valuka Iswar”, the Sanskrit words for an idol made of sand.

When Ram was thirsty, as there was no fresh water readily available (only sea water), he shot an arrow and brought Ganges over here. Hence Bana (arrow in Sanskrit) Ganges. The water that feeds the tank stems from an underground spring at that spot, despite its proximity to the sea.