Ajgaivinath temple or Gaibinath Mahadeo in Sultanganj is dedicated to Lord Shiva. Some say that the ShivLing is Swayambhu, discovered on the rock.

According to a legend, Lord Shiva was given his bow Ajgav here. Thus the place was called Ajgaivinath.

The ancient name of the place was Jahnu giri (the hill of Jahnu) or Jahnu griha (the abode of Jahnu), derived from the name of Jahnu Rishi and Jahnavi, the sacred river Ganga. Jahnu Rishi had his ashram, a center of learning and culture. The river Ganga disturbed Jahnu Rishi who swallowed Ganga. Ganga was later released at King Bhagirath, Lord Rama’s forefather’s request. Jahangira is a distortion of the name, which is now part of the town of Sultanganj. The area was a part of the erstwhile Anga kingdom during the Mahabharata. 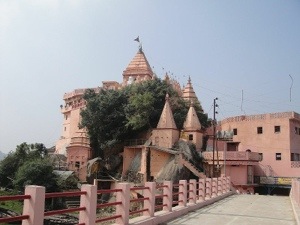