The Marundeeswarar Temple (மருந்தீஸ்வரர் ஆலயம்) is located in the Thiruvanmiyur, Chennai. It is one of the 275 Paadal Petra Sthalams, where the three of the most revered Nayanars (Saivite Saints), Appar and Tirugnana Sambandar have glorified the temple with their verses during the 7th-8th century. The temple has been widely expanded by Chola kings during the 11th century. The Marundeeswarar temple has been a place of curative worship for people with diseases.

Recognizing the penance of Sage Vasishta on Lord Shiva, Indira sent his Kamadenu the divine cow with the sage. Once, the cow delayed to pour the milk for puja. The angry sage cursed it to become an ordinary cow losing its divine status. He also suggested the cow to go to this place and worship Lord Shiva under the Vanni tree to recover its divinity. Kamadenu poured the milk on the Lord and got back its original supremacy. Hence, the Lord has the name Paalvanna Nather. Paal in Tamil means milk. When Sage Valmiki came there to worship Lord Shiva, Kamadhenu ran in fear pressing its feet on the head of the Shivalinga, the scar of which is still visible on the presiding deity..

This place was named Thiruvalmikiyur, which name gradually changed to Thiruvanmiyur. 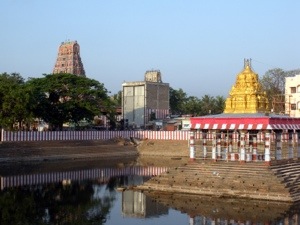