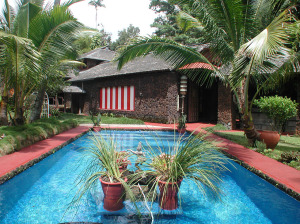 Supreme God Siva is enshrined in the main sanctum in the form of Nataraja and a crystal Sivalingam. In front of Siva’s sanctum is a 700-pound, 3-foot-tall, naturally formed crystal Sivalingam (among the largest known sphatika svayambhu lingams in the world). Just in front of the temple stands a lava rock and redwood timber pavilion for Nandi the bull, Siva’s mount and devotee, a giant form weighing 32,000 pounds, carved from a single stone. A small temple tank has a bronze statue of Saint Sambandar, dancing joyously. Kadavul Temple is open to the public everyday from 9am to noon.