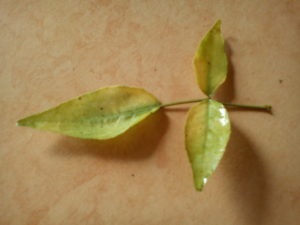 Leaves of the Bel tree are used extensively in the worship of Lord Shiva.

Three leaves, three benefits, similar to the three eyes of Lord Shiva, and having three qualities.
Sins of three births are destroyed by offering one leaf of the Bilva plant to Lord Shiva.

As with most other rituals that intertwine science with religion, the Bel tree has been highly for the medicinal properties contained in its root, fruit and leaves. It is a healing tree which cures all diseases caused by vata (wind) and gives strength to the body. See Health Benefits of Bael.