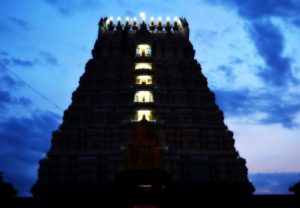 Sincerely greeting that Paramatma acclaimed as Varada Raja Swami, Maharshi Markandeya revealed the Glories of that Jagatsrashta who appeared in Kanchipura following the successful conclusion of the famed Ashwamedha Yagna executed by the Chaturmukha Brahma.

As in the previous Adhyaaya, Lakshmi and Saraswati asked Brahma to give his honest opinion as to the superiority between them and almost immediately Brahma favoured Lakshmi Devi. Sarasvati was highly disappointed and even annoyed with Brahma and took away the ‘danda’ or an Insignia that Vishnu once gave to her which was the power of  Brahma enabling the latter to undertake Srishti or Creation of ‘Charaachara Jagat’or of the Moveable and Immovable Beings. Thus the action of Brahma to create was disabled. Brahma did not wish to entreat Sarasvati to return the Srishti Danda but left for Himalayas to perform penance to Vishnu to request for an Emblem with Vishnu Amsha to Create instead of a Sarasvati-oriented Crest. Vishnu was pleased with Brahma’s Tapas and directed Brahma to perform hundred Ashwamedha Yagnas. Brahma then decided that instead of performing hundred such Yagnas it would be sufficient to execute one Yagna at the Hari Kshetra and asked Vishwakarma the Architect cum Builder of Devas to construct a huge Yagna Shaala right opposite the Idol of Narasimha; he discarded Saraswati as his partner at the Yagna but preferred Buddhi Devi as his ‘Yagna Patni’ to share the duties of a wife as prescribed. Brahma invited Devas, Devarshis like Narada, besides Gandharva-Yaksha- Kinnara-Apsara; Siddha- Saadhya-Muniganaas and decided to perform  a Year- long Yagna; he worshipped Ganeshwara first to facilitate the Yagna without obstacles and then worshipped Yoga Narasimha Swami and initiated the Yagna with formal Mantras by appointing Kumara Swami as Adhavarvu, Maheswara as Udagaata, Varuna as Prastota, Yama Dharma Raja as Hota and Indra who performed hundred such Yagnas in the past as the Yagna Brahma. Since Brahma did not invite Saraswati to participate, she was furious and created powerful flames with her Maya Shakti with a view to destroy the Yagna but the Saviour of the Hari Kshetra viz. Vishnu arrested the Maya Shakti’s both the hands and disabled her. Saraswati took it as a challenge and released Kapalika Shakti but Vishnu in the Form of Nara Simha destroyed the Shakti. Enraged by her discomfiture, Devi Saraswati released ‘Daithyaastra’ but Daityaari Narayana made the Astra futile. Vagdevi then created ‘Karaala Vadana Kalika’ and instructed the Maha Shakti to demolish the Yagna but Vishnu assumed an Eight-Hand Swarupa and having suppressed the Shakti sat firm on her shoulders. Finally with all her powers being overcome, Saraswati was humiliated and swooned out of anger and frustration and took the Form of  ‘Pralaya Swarupi’ called Vegavati River with disastrous speed from Brahmaloka down to Earth heading towards the Hari Shaila. Vishnu sensed the impending danger and decided to resort to her ‘maanabhanga’ or assault her physically;  having become nude he stood before the lightning flash of gushing waters  and  like a Huge Log lied across against the flow. Saraswati having visioned Narayana’s nudity was thus put to shame and without being able to face him entered a ‘Bhu bila’ or a big fissure of Earth and escaped. Then the Yagna commenced without any hindrance; the Yagna Pashu or the Sacrificial Horse was let loose and returned invincible and at the successful completion of the year long Yagna, the ‘Purnaahuti’or the Ultimate Offering to Agni as the climactic Homa of Cow’s ghee was accomplished and Brahma visioned a Massive Flood of Illumination on the Eastern Sky and offered wide and palmful of concentrated homage to that Spendour. That was the most awaited Moment of Sweta Varaha Kalpa’s Vaivasva Manvantara-  Krita Yuga-  Nrisimha Bhagavatmika Samvatsara- Vaishakha -Shukla Paksha- Chaturdashi’s Hasta Nakshatra Suryodaya when Devadhi Deva the Supreme Lord of the Universe manifested himself from the Yagna Homaagni’ as Varada Raja Swami  and handed over the Insignia of Srishti to Brahma Deva. The latter went into raptures and placed the Insignia on his chest with tears of joy and got non-plussed momentarily. After recovering from the pleasant shock, Brahma Deva installed  Bhagavan on the Hasti Shaila on a ‘Suvarna Simhasana’or a Golden Throne in the presence of Devas and other Celestial Beings and Maharshis; in order to cool down the charged and excited atmosphere as also to supposedly quench the thirst of Narayana who was just manifested from Agni, Brahma performed ‘Abhisheka Snaana’ to Varadaraja with potful thousands of Kamadhenu’s ghee with chantings of Sacred Veda Mantras and offered ‘Shodashopacharaas’ or the traditional Sixteen Services such as Aasana- Vastra-Yagnopaveeta- Gandha-Dhupa- Deepa-Pushpa- Phala-Naivedya- Tambula-Mantra Pushpa-Sangeeta-Veda Pathana- Tambula-Chhatra-Chaamaraas. The formal Pujas was followed by bhojanas (Hearty Meals) served to Special Invitees  with Bakshya- Bhojya-Lehya- Chokshya-Paneenias to all concerned in the Maha Yagna. Also Anna Santarpana or Free Meals were organised to the entire citizens of Kanchipura.  Vishwakarma made a ‘Pratibimba Swarupa’or   Replica of ‘Aalaya’; and ‘Nagara’ Pradakshinas or Temple wise and Nagari wise Pradakshinaas or circumambulations were done on Elephant-back; in fact daily worships, Bhojanas and  ‘Gajotsavas’ were also organised eversince.
Pleased by all these arrangments, Varada Swami addressed ‘Brahmaadidevaas’ and Munis:
Yathaaham Virajaa teerey mama Vaikuntha pattaney, Jagadvyaapana sheelaavaad Vishnurityabhidhaayutah/
Prasiddho nivasaamyatra tathaa Kaanchi- purottamey, Harikshetram samaashritya Sarvaabheeshta pradaanatah/
Varadaabhidhayaa khyaato nivasaami nirantaram, Sarvey bhavanto madbhaktaassada maddarshaney rataah/
Sarvadaattraiva tishthantu Vaikunthaadati paavaney, Varshey Varshey Meshamaasi mama Janmadiney Shubhey/
Ghritadhaaraa sahasraabhishechanam mama pujanam, Utsavamcha prakurut Viprabhojana purvakam/

(My Bhaktaas! Just as I had settled in Vaikuntha on the banks of River Viraja and got spread all over the Universe as Vishnu, I will now reside in the Hari Kshetra of Kancheepura; hence those desirous of visioning me could do so with my name as Varada or he who would be the Bestower. In fact I will stay here for good thus making Hari Kshetra as significant as Vaikuntha if not even better! You may therefore even reside at this Kshetra. Every year on my birthday during Mesha month you should all therefore perform ‘Goghritha dhaaraa sahasra -abhishekaa’or thousand Abhishakaas of Cow Ghee (bathing) of my Murti and celebrate this day as a Festival and of ‘Brahmana Bhojana.) Then Brahma Deva addressed all the Invitees of the Yagna to follow the instruction of Varadaraja Swami and assured that those who would participate in the Festival on the lines as instructed would secure ‘Maha Phala’.

Maharshi Markandeya narrated  to King Suratha one telling instance about a devotee who actually experienced this kind of Maha Phala : In the past, one Vaadaadhyaayi Vipra named Bhanuvarna of Gokula on the banks of River Yamuna visited Kanchipura and happened to perform ‘Ghritaabhisheka’ most coincidentally on the ‘Janma dina’ of Varadaraja Swami at the Hari Kshetra and on return to Gokula after some time passed away;  Bhanu varna was being flown to Swarloka by Devaganaas to honour him with the status of Indra but ‘Haridootaas’ intercepted his Soul and took it away to the Everlasting Vishnupada; such indeed was the graceful gesture of Varadaraja Swami! Whoever recites the above account of Varadaraja Swami would certainly secure Varadaraja Darshnana, as assured by Maharshi Markandeya.