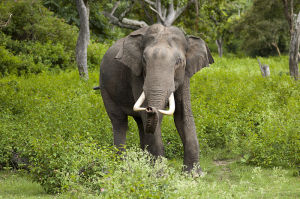 Markandeya Maharshi described the Significance of  Hasti Shaila to King Suratha: Hasti Shaila was an ornament of Hari Kshetra and was famed among the Punya Koti Kshetras of Bharata where Mahendra became an Elephant as a victim of Devi Saraswati’s ‘shaapa’ (Curse). At one stage, Saraswati assumed self-pride and arrogance that she was the Goddess of Learning in the whole Universe. Similarly, Devi Lakshmi felt egoistic that she was the root-cause of Wealth and Prosperity par excellence. Both Saraswati and Lakshmi entered into arguments claiming mutual seniority of status and importance and reached Mahendra to decide. Indra replied that Lakshmi was indeed superior since not only because he was the consort of Narayana but also because she was the Root Cause of ‘Bhoga Bhagyas’ or of Wealth and Fulfillment and moreover she was the mother-in-law of Saraswati. On hearing this Saraswati got furious and became highly critical of Mahendra as characterless as ‘Ahalyaachaara’ or the Spoiler of Ahalya Devi, arrogant, partial-minded and power monger and as such cursed him to turn out to be an elephant. Devi Lakshmi was ever-merciful and understanding; she assuaged his hurt feelings with the curse and stated that none could cross the lines of Fate or ‘karma praarabdha’. She counselled Indra that on descending from Swarga to Bhuloka he should as an Elephant serve and worship at Simhachala Kshetra near Dandakaaranya to worship Nrisimha Deva as also commend Prahlada; seek from Prahlada the ‘Naarasimhaanishtubha Maha Mantra’ to qualify for entry into Hari Kshetra in Kanchipura and meditate the compassionate Hari. Indra followed the precise advice of Maha Lakshmi;

(After securing the Maha Mantra, Indra entered Hari Kshetra and performed concentrated Dhyana on a mountain)

Then Narakesari witnessed Indra in the Form of an Elephant, pierced his sharp nails through its thick skin , broke into his heart with his Yoga Shakti by assuming a ‘Bimbaakaara’ when Indra was engrossed in deep Dhyana. While seeing the Bimba, Indra was surpised to see two Brahmana Boys on the mountain. Indra asked as to who they were; they replied that they were the sons of Shringabheri Muni of Shandilya Gotra, that they were named Hema and Shukla, that their Guru was Gautama Maharshi who instructed them to fetch water from Bhadra River, that while bringing the pots of the water they kept the pots down and went up a tree to cut ‘Samidhas’ (twigs), that a lizard fell in the pot of water and that one Yaksha cursed the boys to become lizards. The lizards fell on the back of the Elephant while they were cutting the twigs and that elephant was none other than Indra! The boys then said that per chance, they as lizards fell on the back of the Elephant who entered Hari Kshetra. Indra who too got relieved of the Saraswati Shaapa touched the lizards who became Brahmana boys again and thanked Indra profusely. Indra in turn commended the Hasti Shaila as the most Sacred Mountain and blessed it:

(Those ‘Maanavas’ who visit the Hasta Giri and worship it day and night on Ekadashaas by fasting and singing ‘Harinaama’ would indeed reap memorable fruits).

One instance of the Experience of Ganu Brahmana would suffice to amplify the significance of Hasti Giri told Markandeya Maharshi to King Suratha: There was a Brahmana named Ganu of Bhardwajasa Gotra and an Expert in Shukla Yajurveda living on the banks of River Sarayu; he was also an adept in Dhanurveda or a Dhanur Vidya or the Art of Archery! But this Brahmana misused his expertise in Archery and cheated the tourists and travellers by frightening them and earning enornous money. On learning of the dirty ways of Ganu Brahmana as a menace to the travellers, one strong and valiant hero overpowered the Brahmana, tied him up, shaved his head, insulted him and threw him in a gutter. Ganu Brahmana was put to shame and while travelling for some time reached Kanchi Kshetra providentially and went up the Hasti Giri and out of exhaustion collapsed and died. Surprisingly, ‘Vishnu Dutaas’ were waiting Ganu Brahmana to lift him to by Vimana to Vishnu Loka! Maharshi Markandeya assured that whoever would read out or hear the account of ‘Kari Giri Darshana’ should be rewarded with Hasti Shaila Darshana Phala!