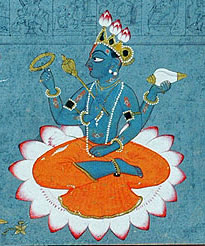 (I implore Shri Va rada Raja Swami’s charming and petite smiling face which is like the tender and ever- fragrant flower bud; so described Markandeya to King Suratha.)

In Kanchipura, there was Kshetraangi Durga; to her Agneya was Purandeswara Swami and to his South was Panchali Durga. A Simhalaya was built to Panchali Durga which again was stationed the afore mentioned Kshetraangi Durga. In the Center of this Square was shining the idol of Varadaraja Hari. Any charity performed in this Kshetra was stated to get multiplied by a crore and was thus acclaimed as Punya Koti Kshetra. To the Agneya of the Kshetra was Vighneswara whom Brahma worshipped before he performed Vaajapeya Yagna to ward off obstacles. There was also Kartikeya to the east of Ganesha whom Brahma worshipped before performing an Ashwamedha Yagna. Brahma also worshipped Panchalika Durga to Kartikeya’s Southern side as also Kshetraanigika Durga as the latter killed Hayasura before executing Hayamedha Yagna. To the south of Kshetraangika was Kambudharini Durga who was worshipped by Bhagavan Vishnu and secured his Shankhu or conchshell. Baanaambika Durga resided in the Village of that name to Kambudharini’s ‘Agneya Disha’ and to her Southern side was Swayambhu Koteshwara Shiva whom Brahma worhipped; Brahma also worshipped to Manikantheshwara in whose honour Brahma did an Ashwamedha Yagna. To the Ishana of Manikantheshwara was Satyanadheshwara who bestowed the boon of thousand eyes to Lord Indra. A Digambara Vishnu in a lying posture was positioned in the Northern direction of Satyanadheshwra and the Digambara Hari destroyed the ego of Devi Vani. A Guha Simha Vishnu resided to the Agneya of Digambara and to the Nirruti of Guha Simha Hari was Ashta Bhuja Vishnu who fell down Maya Kali and sat on her head. Vidyakunda naama Hari was the Southern Resident of Ashtabhuja Vishnu and this Hari killed Kapalika the practitioner of Evil Mantras. To the North of Vidyakunda Hari was Deepaadhaara Janardana who terminated Maya Vahni and held a ‘Deepa’ by his hand. That Vidyakunda showed to the King Tundeera the Swarupa of Vaikuntha Hari who was in the direction of Ishanya. Lord Janardna was the resident of Vaikuntha Haris’s Ishanya and Janardana tore the stomach of a daitya and drank his blood thus converting his body blood red. To this blood red Janardnana Bhudevi worshipped with flowers and secured Chaturbhuja Vishnu as her husband. There were two Lizards of Gold and Silver hung on a ceilng girder to the East of Chaturbhuja Vishnu and these Lizards were two Brahmanas cursed by Indra! To the Southern side of these Lizards were twenty four steps which were originally built by Vishwakarma the Builder of Devas for use at Shri Shaila Kshetra.To the western side of the Steps Devi Lakshni was wedded to Hari and occupied Vishnu’s ‘Ardhaasana’. There was a ‘Punyakoti Sangjnika Vimana’ gifted by Mahendra to Vishnu to the Ishanya of Lakshmi Devi and to the Vayavya of the Vimana was Adisesha Sarovara and whosoever took bath there, especially on Saturdays, and prayed there would scure ‘Kaveri Snaana Phala’. Not far from there was Bhaktodaya Tirtha in which bathing on Ekadashis would yield Ksheerabdhi Snaana phala; Pourandara Tirtha Snaana on Wednesdays provided Yamuna Snaana phala; similarly Panchalaka DurgaTirtha Snanaa during Shravana Nakshatra provided Victory in all deeds as Devi Kalika gave Sudarshana chakra gave Sudarshana Chakra to Vishnu and Dhanishtha Nakshatra Snaana in the same Tirhtha would grant Viraja Nadin Snaana. In all in the Varadaraja Hari Kshetra, there were the Abodes of one Vighneshwara, one Shanmukha, Three Residences of Shivas, Eight of Janardana, their F ive Mudras and five of Tirthas.

The Agneya direction of Kanchipura was acclaimed as Bhuloka Vaikuntha and all the Residents of the Kshetra were virtually ‘Vaikuntha Vaasis’. This Vaikuntha had Five Names of Fame viz. Hari Kshetra, Punya Koti,Vaikuntha, Hasti Shaila and ‘Tri Srotas’. Of this Hallowed Land of Hari was associated with certain Legends of Hari Bhaktas: There was a Brahmana named Gargi who was of ‘Sindhu Tira’ of Vasishtha Gotra, a follower of Rig Veda and a Resident of Baanakunda Nagara, who was an incorrigilbe sinner with all blemishes like Para Daara, Paraanna Bhokta, and Duraachaara Paraayana ie. fond of other’s wives, others’ food and other’s ‘Aacharas’ / or Traditions . Once the Brahmana spent a night on an Amalaaki/ Amla or Goosebury Tree on a Chaitra Month and reaped plenty of Goosebury fruits for his family; when a Brahmana traveller on way happened to reach the same Amlaka Tree and requested Gargi to give him a few Amla fruits, he readily gave the fruits which quenched the Brahmana’s thirst; Gargi also directed the Brahmana as to how to reach a water pond nearby. Gargi who belonged to the Baanakunda Nagari died eventually and promptly Yama dutas claimed Gargi to take him away to Narakas. But Vishnu’s followers made a counter claim saying that firstly Gargi belonged to Hari Kshetra and that prima facie, he should reach Vaikuntha; what was more Gargi gave away plenty of goosebury fruits to a Traveller Brahmana and saved the latter from considerable thirst and also showed him the way to a water body. On both these counts Gargi should attain Swarga! When Dharma Raja approached Vishnu, the latter explained that Gargi was a confirmed sinner through out his life, but he was a Brahmana, Vishnu Bhakta, and saved the life of the Traveller and as such he deserved Vishnu Loka since fire would burn off the material that white ants destroyed too. Indeed, whosoever reads or hears the Legend of Gargi would realise the significance of ‘Hari Kshera Nivasa’!