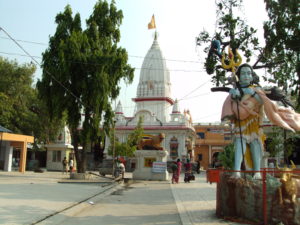 Daksheswara Mahadev Temple (दक्षेश्‍वर महादेव मन्दिर) or Daksha Mahadev temple or Daksh Prajapati Mandir is located at Kankhal Haridwar. Also nearby is the Daksha Ghat on the river Ganga.

It is believed that a pit within the temple grounds here is the exact place where Raja Daksha performed his Yagna.  Daksha Prajapati performed a Yagya and did not invite his son-in-law Lord Shiva and his wife Sati. His daughter Sati went on to burn herself here. This was follwed by the Rudra avataar Virabhadra who cut off Daksha’s head. Lord Shiva later replaced it with that of a goat. Lord Shiva went about carrying Sati’s physical remains. Lord Vishnu helped bring back the balance by using his Sudarshan Chakra to cut off Sati’s body into 51 pieces. The places where these pieces fell became the 51 Shakti Peetha.  Read the entire story here: Shiva Shakti – Sati, Shiva and Daksha’s Yagya