(Those who perform ‘Bhajan’ to Sada Siva are worthy of commendation; who could possibly describe such Magnificent Bhagavan who devoured poisonous flames to save the Universe, destroyed Daksha Yagna, burnt off ‘Kaala’ and saved King Sweta from impossible hardships)!

Daksha Prajapati’s daughter Devi Sati, married to Maha Deva, felt insulted that neither she nor her husband was invited to a Maha Yagna conducted by her father. She attended the Yagna uninvited, despite Siva’s disagreement. Reluctantly Siva let her go but she was accompanied by Siva Ganas as a security. Not only Daksha ignored Sati’s presence, but he made unwarranted and offensive comments against Siva. He said that her husband was inauspicious as he was always surrounded by ghosts, spirits and mean powers and that was why he did not invite him to the Yagna and denied him of the share of the proceeds of the Sacrifice. Sati Devi felt infuriated at her father’s unholy remarks and jumped into the Sacrificial Fire and was charred to death, even before any one in the audience realised, especially the Sivaganas. As Narada conveyed the sad news, Lord Siva became furious and created Veerabhadhra with the instruction of devastating Daksha Yagna, uprooting the beard of Bhrigu who was the chief preceptor of the Yagna and killing Daksha Prajapati. As there was all round violence, bloodshed and obliteration, Lord Brahma prayed to the fuming Lord Siva by ‘Sashtanga Vandana’ or prostration. Brahma’s prayer stated:

(My Greetings to You Lord Rudra, You are the embodiment of Peace, Parabrahma, Paramatma; You are the Creator of Prajapathies who create and thus You are the father of fathers; You are the Preserver of the Universe; You are the Supreme, the Blue Throated, Vedhasey, the Basic Seed, the Cause of Happiness; the Yagna, the Yagna Karma, the Super Organiser of Yagnas, the Omkar, the Vashatkar, I take refuge in You, kindly save us, be merciful and care for us the progeny of Yours). 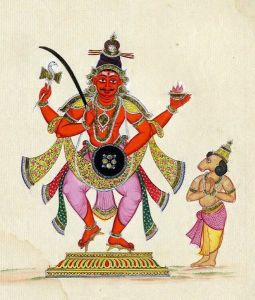 In reply, Lord Siva affirmed that whatever had happened was squarely the evil doing of Daksha himself (Sweeyena karmana Daksho hatho Brahmannasamsayaha). Brahma made a sincere request to forgive Daksha and the ever-merciful Siva planted the goat-head by killing the Sacrificial Goat. The revived Daksha was ashamed and prayed to Siva for forgiveness and Siva replied as follows:

(Human beings pray to me for four end-uses, viz. to escape from the sorrow of wordly entanglements, to enquire about the purpose of existence, to fulfill desires and to genuinely seek me. Among these the best approach is indeed of a Gyani; others are all ‘Agnyanis’ or ignoramus only. Yagnas and such other Karmas without knowledge are imperfect ways of realising Paramatma; ignorant persons try to reach the Supreme Power Siva by reciting Vedas, perform charities or execute Yagnas and Tapasyas; these too are not the ideal means. The best way is to utilise ‘Gyan’ and perform ‘karma’with undiluted concentration and treat both worldly happiness and sorrows with equanimity).

In other words, rituals are not necessarily the ultimate for seeking Salvation, but dedication and enlightenment are. This was indeed a lesson to Daksha who paid too much stress on rituals with disregard to devotion and mental regulation that landed him in his devastation but for Lord Siva’s clemency and forgiveness.