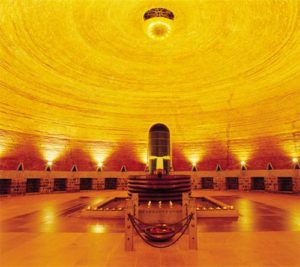 The Dhyanalinga Yogic Temple is an energy centre. 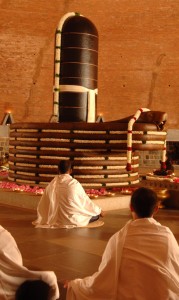 Dhyana, in Sanskrit, essentially means ‘meditation’ and ‘linga’, means ‘form.’ When a person comes to a deep state of meditativeness within himself, the spiritual energy of the person naturally takes the shape of a Linga. It is with this understanding that Lingas came to be revered and worshipped in India right from the pre-Vedic times. A linga is a perfect ellipsoid. Although generally associated with Shiva in the mythology, scientifically, this shape is the only shape that can serve as a perennial storehouse of energy.

“Just sitting silently for a few minutes within the sphere of Dhyanalinga is enough to make even those unaware of meditation experience a state of deep meditativeness.” – Sadhguru 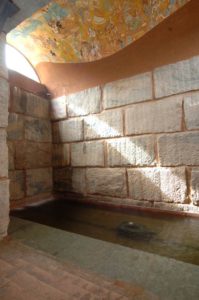 In India it is tradition that prior to entering any temple, one is required to wet the entire body to help make it more receptive to the energies of the temple.

The Theerthakund, a subterranean tank, with a solidified mercury lingam, immersed in water was built as a preparatory tool to enhance spiritual receptivity in a person before entering the Dhyanalinga. It is situated on the northern side of the temple complex as part of the Outer Parikrama.

Since ancient times mercury has been an important substance in all kinds of spiritual alchemy around the world. The Linga, or Rasalinga, weighing 680 kgs, is ellipsoidal in shape and is 99.8% pure mercury solidified at room temperature.

According to the principles of modern chemistry, this kind of solidification is not possible. But here, the Rasalinga has been solidified through the ancient science of Indian alchemy.

In March 2006, Sadhguru consecrated this Linga, energizing it through a powerful process. This Linga will retain these energies almost eternally.

The Theerthakund though basically used as a preparatory tool to enter Dhyanalinga, is very powerful by itself. It straightens out the energy or the pranic imbalances in a person, which leads to physical and mental well-being. Above all, it creates a tremendous receptivity to imbibe the energies of Dhyanalinga. 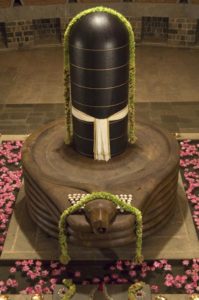 At the heart of the temple, in the sannidhi or sanctum sanctorum, the visitor finally stands before the immense and awe-inspiring Dhyanalinga. Vibrating with the power of the primordial, casting its spell on all those who enter its enigmatic presence, the Dhyanalinga towers up to a height of 13 feet, 9 inches. It rises out of the seven-coiled receptacle, the avudaiyar, which has been designed in such a way that every part of the avudaiyar is 3 feet 3 inches in length and the total length of the avudaiyar is 13 feet 9 inches, the same as the height of the Linga.

Surrounding the Linga is the jalaseema, a water body that has a cooling effect on the Linga and gives the impression that the Dhyanalinga is floating on water.

The Dhyanalinga is made up of a single high-density black granite stone and the Avudaiyar is made of white granite whose density is 30% less than that of the Linga. Both the Linga and the avudaiyar are energized with the qualities of the seven chakras; hence the Linga has seven copper rings and the Avudaiyar is in the form of a seven-coiled snake.

The Dhyanalinga is kept constantly wet to enable the meditator to easily receive the energies emanating from it. Water drips onto it from a hemispheric copper dome coated with gold, which is suspended above the Linga. The resonating sound of water dropping over the Linga, the shimmering reflections of the oil lamps on the golden dome, the subdued interiors, and the all-pervasive silence makes the entire structure ethereal. The natural draught of air and the choice of natural materials make the dome a cool and soothing space, which breathes through every pore.