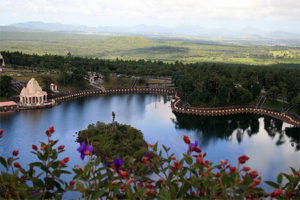 The Shiva temple at Ganga Talao or Grand Bassin is believed to be the 13th Jyotirlinga. It is believed to have been established since 1897 by Shri Jhummon Giri Gosagne Napal and Sri Mohanparsad.

Ganga Talao is one of the natural lakes of Mauritius that rests within the crater of an extinct volcano, with beautiful views over the area. It is considered as sacred as the Holy Ganges in India. Devotees often recount seeing miracles here.

On Maha Shivratree, thousands of pilgrims dressed in white walk long distances and converge on the sacred lake of Grand Bassin. They carry the ‘Kanwar’ – wooden arches covered with flowers and small mirrors, and fetch holy water from the lake. They offer this Ganga Jal on the Shiva Lingas in their homes or localities.

The 108 feet tall Mangal Mahadev Shiva Statue is at the entrance of the Ganga Talao.