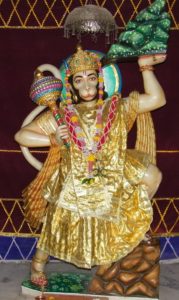 Hanuman is the eleventh avatar of Shiva.

In Hanuman Chalisa, Tulsidasji calls Hanuman the Son of Shankar, and Son of Kesari. Hanuman was born to Kesari and Anjani because of a boon given by Lord shiva or Lord Shankar. The lines thus say Shankar Suvan Kesri Nandan. He was the incarnation of Lord Shiva. Hanuman was also called Maharudra.