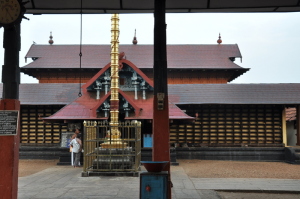 Kaviyoor Mahadeva Temple is also known as Hanuman Temple. As per legend, the main idol was installed by Sri Ram in the presence of Sita, Hanuman, Sugreeva and Vibheeshana on his return to Ayodhya after defeating Ravana. It is traditionally known as the most prominent Hanuman temple in South India.