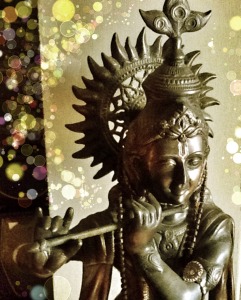 Although Lord Krishna was blessed with His son Pradumna from Devi Rukmini, His other wives especially Satyabhama were keen on further offspring and He therefore approached Sage Upamanyu to guide Him to fulfil the desire for Siva Darshan. The Sage was a known devotee of Bhagavan Siva and had glimpses of the Bhagavan when He was sorrounded by Lords Vishnu and Brahma, Devas and Devi Parvathi. The Sage recalled that he asked for three boons viz. that he should be a Siva Bhakta always, that he should secure the knowledge of visualising the past, present and future and that his family should never be devoid of rice and milk. Bhagavan was pleased with Upamanyu and granted him the boons and also blessed him to live for long till Vaivasvata Manvantara. Having given his own experiences with Bhagavan Siva, the Sage initiated Lord Krishna into Siva Tapasya and gave the Mantra ‘Om Namah Sivaya’. Krishna performed severe meditation by standing on His toes for sixteen months. Thereafter, Bhagavan Siva blessed Krishna with His appearance in full splendour with Parvathi Devi seated on his Nandi ‘Vahana’ along with Devas, Pramathaganas and a big procession of Sages. Lord Krishna prostrated before Siva and Parvathi and asked for eight boons viz. that His intelligence should guide the World into righteousness, that He should bless Him to attain immortal fame, that He should have an abode in the proximity of Bhagavan, that He should keep promoting devotion to Siva Deva always, that He be blessed to secure ten valiant and worthy sons, that He be victorious of enemies, that He be blessed to overcome any evil force in the Universe, and that He should guide and be guided by Yogis and Sages. Lord Krishna also sought boons from Devi Parvathi that He should be in the service of His parents and Brahmanas always. Following the Spectacular Darshan of Bhagavan and Devi Parvathi, Lord Krishna described the great impact that Siva Darshana had on Himself to Sage Uapmanyu and thanked the Sage for the favour.