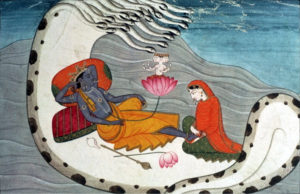 Sage Narayana narrated to Muni Narada the Origins of Sarasvati, Ganga and Lakshmi, the original spouses of Maha Vishnu. A serious trouble arose among the three about their superiority ending up in mutual curses by Sarasvati and Ganga to become rivers, while Lakshmi was somewhat neutral, thus landing Maha Vishnu in a fix. Finally, He gave them the judgment that half of Ganga be converted as a ‘Jeeva Nadi’ (Ever flowing River) in Bharata Varsha to be brought from Vaikuntha, the Abode of Maha Vishnu and another half to be retained in the ‘Jatajuta’ or the thick netted hairs of Maheswara; Half of Sarasvati too be a River visible physically only in parts (Badarikashram for eg.) and as an ‘Anthar Vahini’ elsewhere and another half as the Better Half of Brahma Deva; a part of Lakshmi as Tulsi Devi, a Holy Plant bestowing blessings to devotees, another part as River Padma and the remaining half of Herself as the better half of Maha Vishnu.

Maha Vishnu ordained that the verdicts as above would be in force till the end of Kali Yuga. Accordingly, River Ganges was brought down from Vishnu’s feet (‘Vishnupada’) partly to Earth in Bharata Varsha as Bhagiradhi due to the Tapsya of Bhagiradh to purify the ashes of his ancestors. Devi Sarasvati descended from Vaikuntha to Bharta Varsha and is thus known as Bharati; She is called Brahmi as a dear one to Brahma; as Vani, She presides over Speech; She is Sarasvati as she is visible everywhere in ‘Saras’ (Water Body) and purifies human sins, especially as Rivers. [At ‘Brahma Kapala’ on the banks of the Holi River at Badari, one performs worship to ancestors till date by way of ‘Pinda pradana’].

Devi Tulasi descended from Vaikuntha as the daughter of King Dharmadhvaja and appears in each and every household of Believers and Bhaktas in Bharata Varsha and is worshipped daily, especially by women seeking favours.[Even the attractive fragrance of Tulasi leaves keeps evil spirits away, purifies the air and the leaves have definitive medicinal properties]. In all these manifestations of Devis-be it as Holy Rivers or Holy Plants- the purifying qualities are instant by mere ‘Darsana’ (Seeing) or ‘Sparsana’ (Touch). Indeed, these manifestations are ‘Pratyaksha Devis’ (Ready Evidences) in this Kali Yuga as Dharma (Virtue) and ‘Nyaya’ (Justice) are highly discounted, especially as the ‘Kala Chakra’ (Cycle of Time) rolls by.