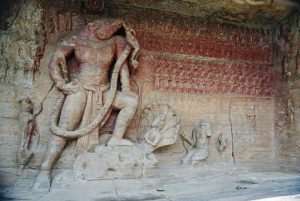 As the impact of Kali Yuga intensifies, significance of Vedas, Sastras, Holy Scriptures, Puranas would eventually diminish. Sraddhas, Tarpanas, Devotion, Yoga, Rituals, Vratas, austerities and all Godly acts would disappear. The Institution of Marriage, Property Rights, Temples, Purity of Thought and Action, Celibacy, Chastity, Respect for Elders, Family Ties, Concepts of Social System and Culture would vanish. Deceipt, Ego, Falsehood, Cruelty, and Utter Lawlessnness would prevail. Nature too would not cooperate as rivers, water bodies and crops would be affected. Earth quakes, Famines and Outbreaks of Endemics and Epidemics would be the order of the day.

As the Kali Yuga reaches the peak, the whole world would be full of Atheists; trees would be of the size of a hand and men and women would be of thumb size. Lord Vishnu would then incarnate as Kalki and ride over a high long horse killing persons left and right with a long sword over three days and nights and disappear, when never-ending rain would start and the whole world would be submerged in water, indicating the commencement of a Pralaya (The Great Dissolution). The entire Earth would disappear as there would be water only all over.

Two Danavas, Madhu and Kaitabha, who would initially give tough time to Maha Vishnu Himself, get into their own trap as Vishnu would offer a boon to the brothers and they in their bravado would reply that they would give a boon instead! Then Vishnu grabs the opportunity and asks for the boon of the death of Danava brothers and they agree to be killed only where there is no water; Maha Vishnu expands His thighs and so do the bodies of Danava Brothers but Vishnu’s expansion of thighs would be limit-less and the bone-marrow of the killed Danavas gets mixed with the Earth lifted by Virat Svarupa from deep waters and hence Her name as ‘Medini’.

Virat Svarupa’s skin pores get merged with the mixture, which after ‘Panchikarana’ or the combine of five elements viz. one fourth each of four other ‘Bhutas’(Elements) viz. Light, Water, Wind and Sky, besides Earth mix up. Thus emerges Maha Prithvi or the Great Earth.That is the re-incarnation of Bhu Devi . Along with Prithvi, come mountains, Seven Seas, Seven Islands, Forests, Sumeru, the Sun, the Moon, other Planets, Indra Loka, Brahma Loka, Vishnu Loka, Siva Loka, Seven Heavens, Seven Nether Lokasa down to Patala, Dhruvatara and so on as also Bharata Varsha, its Rivers, Sacred Places and so on.

In the ages of yore in Varaha Kalpa, Brahma requested Maha Vishnu to take the incarnation of a Boar (Varaha) to rescue the Earth from sinking down to Patala by Demon Hiranyakasipu and thus Bhu Devi is known as Varahi the female form of Earth. From their union was born Mangala Deva (Planet of Mars) . Goddess Varahi is traditionally worshipped at Ambuvacha (Jataka) Ceremony, when Foundation Stone is laid before construction, when one enters a new house, as tilling is taken up anew, and digging of a well or tank is commenced and so on.

She is worshipped by the Seed Mantra: Om Hreem Klim Sreem Vasundharayai Svaha. Maha Prithvi is a memorable example of Patience in carrying the mammoth load of all living and non living entities, the Provider of Grains, Fruits, Vegetables, Flowers, Precious Stones and Metals and is directly responsible for life of all species including those in Seas, Rivers and waterbodies as also vast multitude of non moving objects. Sins perpetrated on or in the offensive of Mother Earth are to be considered as those that attract lowest-grade punishments post-life.