Parasurameswara Temple in Gudimallam near Tirupati. The temple is an ancient one, and has been worshipped without a break for 2300 years.

The main Garbagraha is at a lower level compared to the Mukhamantapa and Antarala. The Siva Linga is 5 feet tall, and has a figure of the Lord carved on it. The figure of Lord Siva also has a battle axe (Parasu) resting on his left shoulder. Legends say that Lord Parasurameswara worshipped Lord Siva here. Legends also believe that the Shiva Linga is a manifestation of Trimurti – Shiva Vishnu and Brahma. The temple Parasurameswaraalayam is built on the banks of Suvaranamukhi river.

The temple was likely built in the 2nd century BC. Some 3rd century BC coins found in Ujjain and 1st century sculpture in Mathura Museum have markings that resemble the Gudimallam ShivaLinga.

The temple is less than 15 minutes from Renigunta railway station and Tirupati airport. 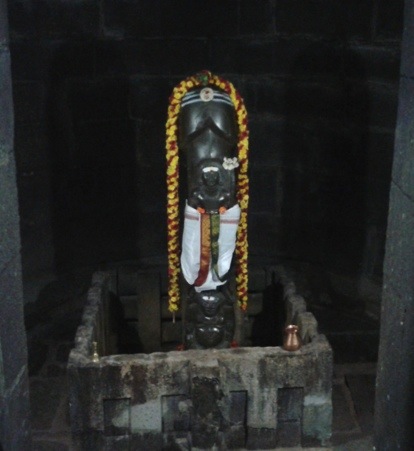