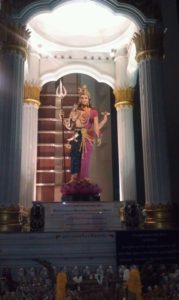 Sage Narayana described to Narada that both Prakriti and Purusha are reflections of each other – the two sides of the same coin. Mula Prakriti or Maya and Para Brahman or Purusha are the Eternal Entities in perfect union, like fire and blazing; Sun and rays, gold and ornaments, earthen pots and earth. They are inseperable but independent.

From the word, Sakti, emerges ‘Sa’ as affluence and success, while ‘Kti’denotes energy and strength. The word ‘Bhaga’ denotes prosperity and joy and added to that is ‘van’ or vati’, again the two suffixes referring to Purusha and Prakriti respectively. Either of the Entities has the facility of being physically manifested or not and has freedom of action or in latent.

The decisions taken by either of them by a kind of Supreme Computer whose readings are always hundred percent accurate and instant. The decisions are taken on the basis of empirical data of interplay of three gunas, and the stored or current accounts of good or bad actions of each and every animate or inanimate being. But physical manifestations apart, either Prakriti or Purusha has no shape nor features, Gunas or aspects, sex, age, beginning or end, time, feelings, prejudices, or any such ‘vikaras’ or of recognisable distinctions.

The very concept of Prakriti or Purusha itself is a mind-born delusion of wide spread ‘Super Net’ called Maya! It was in the scenario of Prakriti and Purusha as Entities, neither separate nor dependent, that Sage Narayana delineated to Maharshi Narada the Genesis of Tri Murthies At the time of ‘Brahmanda Pralaya’ (Ultimate Universal Dissolution), there was a Golden Egg born of Mula Prakriti afloat on water as the life time of the previous Brahma was over. [Brahma’s age is one hundred Brahma years comprising two Parardhas; His one day equals 1000 cycles of four yugas or one Kalpa, and there are fourteen Manus in each Kalpa. At the end of one Maha Kalpa of Brahma’s day and night, there is a kalpa pralaya. At the end of two such Parardhas or hundred Brahma Years, there is a Brahmanda Pralaya; as now, Brahma’s age is 155.52 trillion human years or the first day of His 51 st year]. As the Golden Egg ( ‘Brahma’ or huge + ‘Anda’ or Egg) broken into two parts, there emerged a boy of dazzling radiance of million Suns, Who was thumb- sucking and hungry for milk, without a mother or father, but would soon be the ‘Virat Swarupa’ Maha Vishnu. The Boy grew fast bigger and bigger as there were innumerable Universes in His skin pores with one ‘Vaikuntha’ above all the Universes.

In each such Universe, there are God-heads corresponding from the Trinity down- ward. One could imagine a huge Hall of mirrors arranged in a manner that there are various combinations of Brahma, Vishnu and Maheswara on an infinite scale. In each such mirror, there are multiple ‘Srishties’ (Creations) to the last details: there are thirty million Devas including Dikpalas, Planets, Bhurloka, Earth, Patala Lokas, Human beings, residents of the upper and lower regions of Earth, Sages, Devils, Raksashas,and so on. In another scenario, Virat Swarupas of Vishnu giving birth to Brahma from His navel over the lotus stalk and the cosmos, from Brahma’s mind the Manasa Putras like Sanaka Kumaras, from His forehead the Eakadasa Rudras and thus the process of multiple Creations including Vedas and other Scriptures, human beings, animals, birds, Evil Forces and so on.

The Multiple Virat Rupas also create Vishnu the Preserver and Siva as the Destroyer. Thus at the instance of Devi Bhagavati and Maha Bhagavan-the Prakriti and Purusha-was born the Virat Swarupa -Maha Vishnu- who in turn replicated endless Universes, as many Virat Swarupas of the replicated Universes paid immediate allegiance to Prakriti and Purusha.