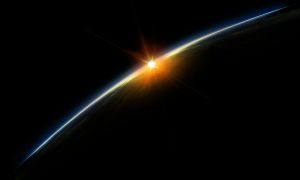 Maha Muni Narayana, the son of Dharma, explained the broad outline and features of ‘Prakriti’ to Maharshi Narada. Of the word Prakrit, the prefix ‘Pra’ stands for Superior or Excellent and ‘Kriti’ denotes Creation. A closer focus on the word reveals ‘Pra’ for Satva Guna, ‘Kri’ Rajo Guna and ‘Ti’ for Tamo Guna. Satva is pure and transparent; Kri for Rajo Guna or of mixed quality and Tamo Guna, the hider of Real Knowledge.

The act of creation was the product of ‘Paramatma’the Super Energy, one side of that being Prakriti and the other side is ‘Purusha’. Paramatma by His Yoga or Maha Shakti (the Holy Ghost) divided Himself into two parts, one a Purusha and another the Prakriti. The ‘Mula Prakriti’ which emerged thus manifested into five major Forms, viz. Durga, Radha, Laxmi, Sarasvati and Savitri.

Durga or the better half of Siva is the Highest Shakti, Narayani, Vishnu Maya and Parabrahma, worshipped by Brahma, Devas, Siddhas, Sages and devotees, being the Prime Energy, the Omni Fire and the Omni Light. She is praised by Vedas and Shastras as the Maha Maya, the Cause of Causes.

The second among the Shaktis is Lakshmi , who is of ‘Suddha Tatva’ which is far superior to Satvika Guna, and is the bestower of prospertity and happiness. She is indeed the source of life, free of greed, anger, meanness, vanity and lust. She is the strength of Maha Vishnu, Rajya Lakshmi for Royalties and Griha Lakshmi for Householders, representing ‘Ashta Lakshmis’ viz. Adi Lakshmi, Dhana Lakshmi, Dhanya Lakshmi, Dhairya Lakshmi, Santhana Lakshmi, Vidya Lakshmi, Gaja Lakshmi, Vijaya Lakshmi. She is also the embodiment of ‘Soundarya’ (Beauty), ‘Aishvarya’ or Great Prosperity, ‘Kirti’ Lakshmi (Fame), ‘Sahasa’ Lakshmi (Enterprise), ‘Vanijya’ Lakshmi (Business and Trade) and ‘Daya’ Lakshmi.

The third manifestation of Shakti is Sarasvati , the Goddess of ‘Vidya’ (Learning), intelligence, memory, ingenuity, wisdom, literature and poetry, Music and fine arts, argument, Vedas and Vedangas, Vyakarana (Grammar), Mantras and Tantras, Gayatri, mental faculties, discipline, knowledge, devotion, and anything to do with Godliness.

Radha is another manifestation of Shakti, who is a symbol of pure love, dedication, high quality of devotion and infatuation. She is the queen of Ras Leelas (Group dances) with several Gopikas and as many Krishnas with ecstatic singing and body movements, quite unaware of public gaze; but the Ras Leelas are hall marks of bhakti and Krishna consciousness, of Sankhya yoga or practice of Dvaita the essence of which sums up the union of ‘Atma’ and ‘Paramatma’ or Praktiti – Purusha and of the confluence of Mula Prakriti and Shiva Shakti. Prakriti Radha is far beyond the Gunas of Sattva, Rajas and Tamas verging on Nirguna or the reality position of ‘Thaadatmya’ (oneness). She has no ‘Ahamkara’ whatsoever as even remote traces of egoistic nature would rapidly erode the purity and sincerity of selfless attachment, let alone the feelings of bliss.

The next Shakti is Savitri or Gayatri , who is essentially based on ‘Japam’ or repetitive recitation of Short Mantras to attain concentration and mental fixation on the part of Devas, other extra-territorial beings, Sages and humans. Residing in Brahma Loka and being an embodiment of Suddha Tatva, Her demeanor is of crystal clear nature and is the bestower of power of mind; She is the Sarva Siddhi Pradayani and contributor of happiness in the current life and sponsor of bliss therafter. She also provides Saubhagya and Good Fotune to those who pray to Her on lasting basis.

Apart from these basic Shakties, Marshi Narayana gave very many other Shakties like Tulsi Devi who is the consort of Vishnu, the Shakti of sin-burning nature and bestower of well deserved boons; Mansa Devi, the daughter of Ananta Deva and disciple of Shankara, a noted Siddha Yogini, a Great Tapasvini and devotee of Lord Vishnu; a sixth part of Mula Prakriti and hence called Shasthi Devi, being the leading of Sixteen Matrikas who is celebrate, protects every child from Evil forces at the time of birth as an invisible Yogini and is worshipped on the sixth day after birth (hence the name of Shashthi Devi) and again on the twenty first day; She is also worshipped in Vaisakha Month for the continued protection of a growing child.

Mangala Chandi is another extension of Mula Prakriti who visits each and every household always and is pleased with worship on Mangalavar (Tuesdays). In the forms of Durga and Kali, She killed the evil brothers of Sumbha and Nikumbha, as the foolish Demon brothers who did severe Tapasya to secure boons of longevity, except from Women; little did they realise that Shakti is the eternal source of strength and the Primeval Energy unparalleled.

Vasundhara Devi or Earth too is a manifestation of Mula Prakriti, bearing the entire burden of humanity and sourcing countless boons even without asking for. She is the Great Provider including food, shelter, water, fruits, flowers, gems and jewels, metals, and the greatest support for all. Her patience is eternal and distinctive. Indeed, existence is indeed impossible for any activity and the bounty of Nature is an inborn boon to humanity as a whole. There are other ramifications of Prakrtiti, viz. Svaha Devi the wife of Agni or Fire without whom no Rituals, Yajnas are possible nor Dikshas and Dakshinas; the name of Deva Pitr’s husband Svadha Devi’s has to be used in every Homam by all Sages and humans as the Sacrifices are rendered futile otherwise.

Svasthi Devi , wife of Vayu Deva, has to be remembered at any function to ensure its fulfilment as also to bless the persons responsible for performing the function; Pushti the wife of Vighnewara and the Goddess of nourishment to ensure strength of humans; Tusti the wife of Ananta Deva to safeguard health; Saptati wife of Isana Deva to save from the pangs of poverty; Dhriti wife of Kapila Deva to develop the quality of patience; Sati the wife of Satya Deva to ensure the bonds of affection of every household; Pratishtha, the wife of Punya Deva to distinguish a person from the normal beings to a celebrity; Kirti Devi the wife of Sukarma to bestow fame and name; Kriya Devi, and  the Goddess of action and endeavour the wife of Udyoga or enterprise.Besides there are parts of Mula Prakriti like Dharma Devi, Niralamba or without support, Priti or (contentment), Sukha (Happiness), Sraddha or faith, and Bhakti or devotion. Prakriti’s manifestations also included Rohini wife of Moon, Sajna of Sun, Satarupa of Manu, Sachi of Indra, Arundhati of Vasishtha, Devahuti of Kardama, Prasuti of Daksha and so on.