Suta Maha Muni referred to the ‘Ashtottara Mantra’ of Vishnu viz. Om Namo Naraayanaaya which when recited yileded great consequences especially when the Mantra was pracised with full vigour and by Manasa-Vaacha-Karmana means or by way of mind, vocal and deed; in other words, while in every action while thinking, saying any thing, taking any action or doing some thing.Then the Dwadadsha Mantra Om Namah Vaasudevaaya of Vishnu was referred to. Further Suta Muni stated that the Shiva Shadaakshara Mantra of Om Namah Shivaaya and of the Shiva Ashtottara Mantra of Om Namastey Shankaraaya were stated to be of high consequence:

(Om Namassivaaya Mantra is Sarvaartha Saadhaka or the Great falilitator; The Shiva taraayeti Panchakshra is highly propitious and so are the Mantras viz.Mayaskaraaya and Shankaraya; Rudra as the Pradhana Purusha is always prayed by Brahma, Vishnu and Indra. The Mantras are all so effective that they could destroy the impact of even Brahmahatya sin instantly.)

In Treta Yuga, there was a Brahmana called Dhunduma who was corrupt with vices and married a woman of good background but gave birth to a son on Amavasya. Sage Mitra Varuna had no hesitation in declaring that the son was worse than his father. But Vasishta Muni gave a ray of hope that in course of time Dhundhuma might have better days. The Brahmana performed Jataka karma and other formalities and hoped that time might be the healer to reform his son. But unfortunately the son married in adharmic way and one night got home drunk and killed his wife. The wife’s parents and brothers killed the son and the rest of his family. Out of disgust Dhundhuma took to roads and entered an Ashram of a Sage in a forest, where the Sage was performing Pashupata Vrata and learnt the Panchakshara Mantra; for the rest of the Brahman’s year and odd life, he performed the Vrata and Japa and died. On his death, Yama Dharma Raja who knew of the Brahmana’s-life events fully, but hesitated and weighed the last one year’s life as against the rest of his whole life and called for a Pushpaka Vimana to despatch him to Shiva Loka; he also took a lenient view of all others of his family. 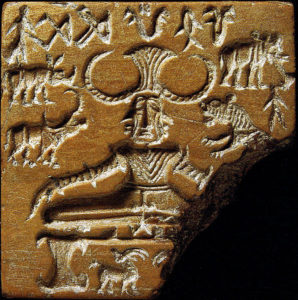 Definition of Pashutwa and Pashus: Maharshi Shilada explained to Sanatkumara that all the Beings from Brahma to grass blade were subject to Pashutwa as Bhagawan Vishnu tied up the Beings with various facets of Pashutwa which were all the countless forms of Maya and Pashupati Shankara as the supreme chief alone could grant them relief individually or totally at the time of Pralaya. Only Jnaana Yoga could free the ‘Pashus’ as otherwise Avidya would continue to ruin them till the destination point of Vimochana or the Final Relief. Shankara alone is the Destiny and the Twenty Four types of Tatwas are the manifestations of Maya or the shackles. The Tatwas are: the Ten Indriyas or Limbs; four latent Subtle Forms of Manas-Buddhi- Chitta and Ahamkaara; Pancha Bhutas of Earth-Water-Light/heat, Air and Sky; and Pancha Tanmatras of Shabda-Sprasha-Rupa-Rasa-Gandhas. As the bandhas are thus tightly tied up around the Pashu or the Jeeva, strong hold of Bhakti could wither away the attachments and ‘Upasana’or meditation is the key to open up the tight box! Bhajan is another name of Bhakti which comprises of Manas-Vaani-Karya or Mind-Voice-Deed. Bhakti or devotion is thus the smasher of sins as displayed in Three Essential Forms viz. Manasa Bhajana or Introspection; Vaachaka Bhajana or Vocal-Based; and Kayaka Bhajana like Pranayama and such other physical controls. Thus, Pashus are arrested by Pancha Kleshas or Five Hurdles viz. Avidya (Ignorance), Asmita (Egotism), Raaga (Desire), Dwesha (Dislike) and Abhinivesha (Obsession). Bhagavan has little relvance for ‘Paapa-Punyas’ and is away from ‘Chetanaachetana Prapancha’ or the Universal Limits of Living or Non-Living Beings; although he has spread out, he unaffected by its goings-on; the Unique Link however is Omkara or the Pranava Vaachaka. Once one masters Pranava, all the Siddhis are automatically available. Little wonder, Shambhu is available through the tiny tissues of the Body and its control besides the Antahkarana which is a nucleus of Paramatma. In other words, Self-Regulation and Inner-Consciousness attuned to the Supreme Force called Paramatma is Pashupata Vrata all about!