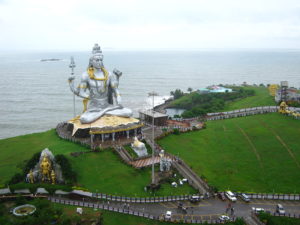 The temple of Shree Murudeshwara (Kannada: ಮುರುಡೇಶ್ವರ Hindi: मुरुदेश्वर Sanskrit: मुरुडेश्वरम् ), consecrated to Lord Shiva, lies in the holy coastal town of the same name in Bhatkal Taluka of Uttara Kannada district in Karnataka State, India. Situated between the towns of Honnavar and Bhatkal, Murudeshwar Town lies on the coast of the Arabian Sea. The shrine is famous for a statue of Lord Shiva which is among the tallest statues of the Deity in the world, 123 feet (37 m) high. The temple built atop the Kandukagiri Hillock surrounded on three sides by the sea attracts pilgrims in their thousands. Two life-size elephants in concrete stand guard at the steps leading to the temple. As one ascends the hillock, one finds a shrine to Jattiga seated on a horse. One also finds a 20-storied Gopuram constructed at the temple. The entire temple which is generations old, including the temple complex, and the 2371/2 – foot tall Raja Gopuram, which is one among the tallest of such towers anywhere, was modernised by businessman and philanthropist R. N. Shetty. The sanctum santorum has been preserved as it was and houses the main deity, Shree Mridesa Linga, also called Murudeshwara. The lingam, a rough rock inside a hollowed spot in the ground about two feet below ground level, is believed to be a piece of the original Atma Linga of Lord Shiva. Devotees may perform special sevas like Abhishekam, Rudrabhishekam, Rathotsavam. Entry into the sanctum is banned. A fort situated behind the temple is said to have been renovated by Tipu Sultan of Mysore. 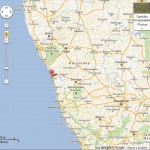 How to get there:-