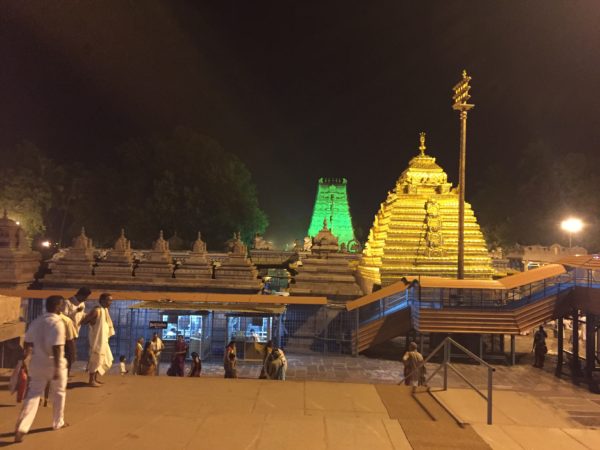 Secondary Gateways In addition to the main gateways, there are four secondary gateways located at four corners:

The images of the presiding deities of the Srisailam Temple, Lord Mallikarjunaswamy and Devi Brahmaramba, were enshrined in the most recent renovation-cum-restoration carried out by the devout and grateful Vijayanagara king Harihara Raya in 1404 AD. A massive fort, with six meter high walls encloses the temple complex. The fortress-like wall, which is 20 feet high, 6 feet wide and 2120 feet in circumference, was constructed in 1520 AD. The wall has 3200 stones, each weighing over one tonne, and is decorated with fine relief carvings depicting scenes from Hindu mythology, a treasure house of sacred art in itself. A cluster of minor shrines within the temple compound include the Sahasra Linga, Pancha Pandava temples and Vatavriksha. The sculptures in the temple are awesome in their antiquity and artistry. About one hundred and sixteen inscriptions can be found in and around the temple, invaluable for historical, religious and artistic reasons.