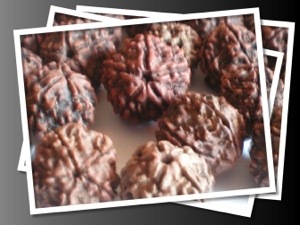 The origin of Rudrakshas [dark beads of Tree, termed Elaeocorpus Ganitrus in Latin language] or Lord Siva’s tears, extensively used as Prayer Rosaries, goes back to Maha Deva’s killing Tripurasura, who sought to destroy the Universe and whom all the Devas, Brahma and Vishnu failed to control.

Maha Deva concentrated with His eyes wide open for several years together to create a very highly potent weapon by name ‘Aghora’ with which to annihilate the Demon and in the process trickled tears which produced a stream from where sprang a Rudraksha Tree.

The Rudraksha Seeds are of thirty eight varieties. From Lord Shiva’s right eye, signifying ‘Surya Netra’ (Sun God), emerged from the Trees that yielded twelve kinds of yellow colour seeds;from His left eye, signifying ‘Soma Netra’ (Moon) came sixteen varieties of white coloured beads, and from the Lord’s third eye on His forehead representing ‘Agni Netra’ (Fire) came ten varieties of black colour. The white variety of the beads are meant for wearing by Brahmanas, the red colour by Kshatriyas and the black coloured beads by Vaisyas and others.

‘Eka Mukhi’ Rudrakshas represent Siva Himself the wearing of which washes off even the worst sin of a killing a Brahmana’; two faced one represents Deva and Devi destroying two kinds of sins among ‘Pancha Paatakas’; the three faced bead representing Agni Deva removes the sin of killing a woman; the four faced Rudraksha representing Lord Brahma terminates the sins of killings in general; the five faced bead is like Rudra removing sins of consuming prohibited material or places; the six faced one is the six headed Kartikeya washing off ‘Brahma hatya’; the seven faced Rudraksha stands for ‘Ananga’ or ‘Manmatha’ removes the sin of stealing gold and other valuables; the eight faced bead represents Lord Vinayaka who not only removes the sins of illicit relations but also provides plenty of food, Vastras, gold and so on ; Lord Bhairava is manifested in the nine faced bead standing for Contentment and destruction of several sins; the tenth faced bead represents Janardana obliterating the ill effects of Planets and demolishing the evil impact of Spirits like Pisachas, goblins and the like; the eleven faced Rudraksha stands for Ekadasa Rudras bestowing the benefits of horse sacrifices, Vajapeya Sacrifices and gifting several cows; ‘Dwadasa Adityas’ or Twelve Suns [Ansa, Ariman, Bhaga, Daksha, Dhatri, Indra, Mitra, Ravi, Savitri, Surya and Yama] are denoted by the twelve faced Rudraksha which yields the advantage of Gomedha and Asvamedha Sacrifices, fearlessness from cruel animals and armed enemies, attainment of kingships, and dissolution of sins of killing elephants, horses, deer, cats, snakes, mice, frogs, assses and such other animals. It is said that a thirteen faced Rudraksha is a great rarity representing Kartikeya and if available would absolve even patricidal and matricidal sins, attainment of ‘Ashta Siddhis’ and the capability of creating gold, silver and precious stones, thus qualifying consummate happiness. Wearing a fourteen faced Rudraksha which perhaps is an almost impossibility is like wearing Siva Himself! Meditation (Japam) is to be performed by using a twenty seven bead, or fifty four bead or one hundred eight bead rosaries and wearing a hundred and eight rosary is a constant protection of Maha Deva Himself.

Wearing one- faced, five- faced, eleven- faced or fourteen- faced Rudrakshas is highly recommended. He who holds thirty on neck, fourty on head, six each on ears, twelve each on hands, sixteen each on arms, one each on eyes, one on hair or crown, and hundred and eight on breast totalling two hundred and fifty one become Maha Deva Himself. It is stated that wearing even one bead at the time of bathing would be meritorius and similarly at the time of death too, if a rosary of beads is worn, Lord Kartikeya would halt and lessen the impact from Yama Dootas. Medical values of wearing Rudraksha malas (rosaries) are said to be immense in warding off depression, stress, diabetes, cancer, heart and blood related diseases. Close contact of body parts like head, heart, neck, ear and hands assures protection from ill health.

All vedic acts are to be accompanied by wearing Rudraksha Malas like Sacrifices, Vraths, Pujas, holy baths, Shraddhas, Solar and Lunar Eclipses, Uttarayana and Dakshinayana ‘Samkramanas’ (entry timings), and Full Moon and New Moon days or Pournami and Pradhama days.However one should not touch or consume wine, meat, tobacco, onion, garlic and such impurities as also during mating, since these constitute atrocious insults to Maha Deva. However, Sage Narayana quoted Maha Deva telling Kartikeya that any human being irrespective of caste or even animals or other species carrying Rudrakshas would be immune from sins as an ass carrying a load of the beads died on way but had salvation!

Use of Bhasma (ash), preferably by the Fire oblation performed by Brahmanas themselves or atleast by burnt remains of cow dung, is to be smeared on forehead, shoulders and chest is as important as wearing Rudrakshas. Soon after bath, the use of Bhasma mixed with water drops as three curved lines be applied first as two top lines by the middle finger and ring finger from left to right and then the lowest line by the thumb from right to left. The applications of bhasma is to be done thrice a day, before the Tri-Sandhya Gayatri Japas. While applying the Bhasma thus, three pranayamas be preceded and ‘Dhyanam’ of Panchamukha (Five faced) Maha Deva viz. ‘Isana’ (facing South East named Eswara), ‘Tatpurusha’ (facing East named Maha Purusha or Tamasika), ‘Aghora’ (facing South named Siva with destructive cum regenerative Power), ‘Vamadeva’ (facing North, known as Preserver and healer) and ‘Sadyojata’(facing west representing Siva of Creative Power). [The ‘Panchamukha Dhyanam’ to be performed as per the relevant portion of ‘Maha Nyasam’viz.

Thereafter, relevant Mantras be recited to say that each of the Panchabhutas is Bhasma viz. Fire is Ash, Earth is Ash, Water is Ash, Ether is Ash and Radiance is Ash. Then apply Bhasma as prescribed above. If Bhasma is not applied, Brahmanas are not entitled to perform ‘Sandhavandana’or Gayatri Japam. Contrarily, no sin could enter the body once Bhasma is applied as prescribed. This is why Brahmanas take care to apply the Tripundra by the use of the three fingers as the ring finger represents as A, the middle finger represents U and the fore finger represents M from the Pranava Mantra OAM. At the same time however, any person irrespective of caste could use ‘Vibhuti’ (not the Bhasma as disinguished above ie. from Yajna fire or from dried cow dung burnt) and the application of vibhuti has far reaching beneficial impact. However, care should be taken not to apply it on unclean bodies and while spitting, sneezing, coughing, using toilet and after washing off , be reapplied with clealiness ensured, since Vibhuti is Maha Deva Himself.