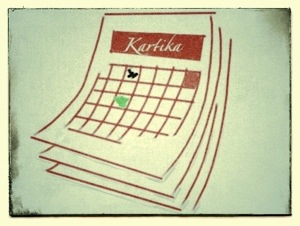 Sage Narada enquired of Lord Brahma as to which was the best month of a year, who was the best Deity to worship and which was the best Tirtha to visit. Brahma’s instant reply was that the best month of a Year was Kartika, the Supreme Deity to worship was Narayana and the most Sacred Tirtha was Badari Kshetra. As regards Kartika Month, Bhagavan Vishnu always accorded high esteem and whatever good deeds were performed in the ‘Masa’ were fully accepted by all the Devas since they were readily available there through out the month. The acts and endeavours of the devotees like ‘Snaan’, ‘Daan’, ‘Bhojan’, ‘Vrath’, ‘Til’(Sesame Seeds), Dhenu (Cows), ‘Suvarna’ (Gold), ‘Rajat’ (Silver), ‘Bhumi’ (Land), ‘Vastra’(Clothing), Tapasya, Japa, Homa, Yagna, Annadaan, Puja with Tulasi leaves, Abhishek of Vishnu’s Idol with Ganges and other holy river waters as also ‘Panchamrit’ comprising milk, ghee, curd, honey and sugar; ‘Shodasopacharas’ to Deities, Veda- parayana, Purana Shravan, Bhajans, Deva Stutis, Visits to Temples, fasting, abstinence, ‘Jaagarans’ (Keeping awake in the night singing hymns), Guru Seva etc. would indeed secure manifold returns in the consecrated month of Kartik. At every time during the day and night, ‘kirtans’(Stanzas) on one’s own lips must be uttered like ‘Govinda Govinda Hare Murari, Govinda Govinda Mukunda Krishna, Govinda Govinda Rathangapane, Govinda Damodara Maadhaveti’. Specific time on each day must also be apportioned for ‘Bhagavat Geeta Paath’ or reading as many Chapters as possible.Also, a devotee must observe sleeping on the floor and if possible perform Kanya Daan and Vidya Daan in the month. Practice of the month long austerity and good conduct even in one Kartika month in a year ought to result in tangible benefits for sure!

One has to observe certain dont’s during Kartika Month such as avoiding use of oil on the body and food (except on Naraka Chaturdasi), food from others, fruits with many seeds, rice, left over or spoilt food, heavy food and twice a day, drinking intoxicants, use of glass items, eating group food or Grama Purohit, Shraddhas and from women during menses period; eating in lotus leaves, consuming brinjals, carrots, ‘Loki, onions and masoor dal; eating on Ekadashi days; turning off guests at eating time; conversing with chandal, Mlechha, Patita (women with bad character), Vratahin ( those not observing the rules of Kartika month), hater of Brahmanas, those who talk ill of others, non believers of God/ Godmen and immoral beings. During the month of Kartika, Snanaas (bathings) acquire considerable importance. Those who are devoted to Surya Deva, Ganesha, Shakti, Siva and Vishnu are all required to formally observe Kartika Snanas. Snanas in favour of Surya need to be followed as long as Surya is in ‘Tula’ Rasi. Snanas in favour of Shankara be performed from Asvayuja Pournami to Kartika Pournami. Bathings in favour of Devis be observed from Aswayuja Shukla Pradhana day till Karthika Krishna Chaturdasi while for Ganesha Snanas are to be performed From Ashvin Krishna Chaturdasi till Kartika Krishna Chaturdasi. Bhagavan Janardana would be pleased with formal Snaanas from Aswin Shukla Ekadashi till Kartika Shukla Ekadashi.Those who observe the Snana Procedure during the month of Kartika would be free from the tributations of Yama Dharma Raja. Special Snaans and worship to Radha and Gopala during the month preferably under a Tulasi Tree have immense significance. While observing Kartika Snaans the following Stanza is recited:
Kartikeham Karishyami Pratha Snaanam Janardana,
Preethyartha Tava Devesha Damodara maya sahah.

(Janardana! Deveshwara Damodara! I am performing my early morning Snaan to please You and Devi Lakshmi). Also recite the following:

(Bhagavan! Please accept this ‘Arghya’ (handful of water) of mine to please You and Devi Radha; My greetings to you Kamalanaabha, greetings to You Jalashaayiney; greetings to You Hrishikesha; my repeated greetings to You!). Before taking bath, one should take the name of ‘Pavitra Ganga’ (Holy Ganges); while taking the bath on the head, recite ‘Purusha Suktam’ / ‘Sri Suktam’ and after the Snaan, take Tulasi in hand and perform ‘Achaman’(Sipping water thrice with the Names of Keshava, Narayana, Madhava etc.) and later apply Tilak / Vibhudi/ Kumkum on the forehead. Cold water snaan is always preferable to hot water for double Punya. It is said that there are four types of Snaan viz. ‘Vayavya’ (along with ‘Godhuli’/Cow dung); ‘Varuna’ (in the Sea and Holy Rivers); ‘Brahma’ or with Veda Mantras and ‘Divya’ or as Sun rays pass on the body. Snaanas by women should not be with Veda Mantras.

Lord Brahma affirmed that the fortnight from Kartika Krishna Trayodasi to the end of the month ie from Deepavali on the Amavasya of Aswayuja should be observed as Festival Days. The ‘Pradosha’ time of that Trayodasi is the most significant time when Lord Yama is worshipped with ‘Deepas’ at the main door of the residence and Naivedya to ensure that there would never be an ‘Apamrutyu’ or Akaala Mrithyu (premature and sudden death) in the family. Yama Raja would be pleased with the recitation of the Mantra after the worship:

[With this Deepa daan on Trayodashi, may Surya’s son Yama be pleased without Mrityu (Death), Pasha (Yama’s rope of death), Danda (Yama’s stick) and ‘Kaal’ (Death time)] Thereafter, on Kartika Amavasya morning, worship is to be performed to Devatas and at the Pradosha time of the same evening, strings of ‘Deepas’ should be lit and Devi Lakshmi is worshipped saying: ‘Devi Lakshmi! We welcome You with ‘Deepa Jyoti’ (the splendour of these Lamps) as You are the Symbol of Limitless Illumination; You are the representation of Surya, Chandra, Agni, and Gold (Prosperity); Do make Your residence as our own!’ Thus the Kartika Krishna Paksha is the most auspicious fortnight praying for ‘Apamrityu’ / Good Health to Yama raja and Wealth for Devi Lakshmi ushering an era of happiness.If during the entire Kartik Month-or atleast ‘Pancha Rathras’ (five nights), a devotee recites ‘Om Namo Narayanaya’ as well as reads / hears ‘Vishnu Sahasranam’ and ‘Gajendra Moksha Paatha’, he secures freedom from want, disease, adversity and discontent. Most certainly, the austerities observed on Kartika Ekadashi day alone would ensure contentment in ‘Iham’ (Current Life) and bliss in ‘Param’ (Post Life). Each act of virtue on the most auspicious day of Kartika Ekadashi is bound to obtain a multiplier effect endlessly.