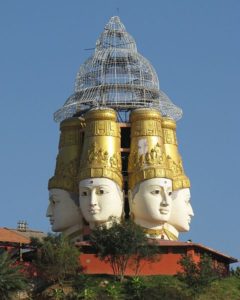 Although satisfied with the termination of Tarakasura, Kartikeya had strong sense of remorse of having committed Brahmana hatya (killing of a Brahmana) in the depth of his conscience, especially because the Rakshasa was an ardent devotee of Lord Siva. Then Vishnu cajoled Kartikeya saying that deducing from Shrutis (Vedas), Smritis (Shastras), Itihasa (History) and Puranas, there was no sin in killing a kindless Brahmana who had no hesitation in harassing and murdering others. If a cruel demon was distressing and the victims sought refuge, the valiant had a duty to protect Dharma (Justice). As regards the devotion of Siva, Vishnu said that besides being repentant, Kartikeya should perform ‘Siva Aradhana’ as there was nothing else in the Three Lokas more ideal; indeed Parama Siva’s chariot is Prithvi (Earth), Brahma is the Sarathi (driver), Vishnu is the arrow, Mandharachal is Dhanush (Bow) and Chandra and Surya are the wheels. Some exceptional Sages might resort to the Yoga route to worship Siva, but the easier way is to perform Linga Aradhana. It may be recalled that at the time of Creation, Lords Brahma and Vishnu had a controversy about their inter se seniority and Bhagavan Siva took the form of a huge Siva Linga which had neither beginning nor end and directed them to worship the Linga by performing ‘Abhisheka’ (bathing) with milk, ghee, honey, curd or pure water and secure boons from Him. Hence Vishnu suggested that Kartikeya should dedicate Siva Lingas made of earth, bricks, or stones and wash off the stigma or sin of Brahma Hatya. Accordingly, Kartikeya called Vishvakarma the Divine Architect and asked that three Visuddha Lingas and their complexes be constructed forthwith. Then in the presence of all the Devas, Brahma, Vishnu and Parama Siva Himself, Skanda established one Linga named ‘Pratigneswar’ on the West. Lord Siva blessed Kartikeya to declare that whosoever worships the Linga on Chaitra and Kartika Sukla Ashtamis after taking bath, observing fast, performing Puja and Jagaran (night-long awaken-ness) would be fearless of Mrityu (death). A second Siva Linga was established at Agnidasha (Agneya) where Tarakasura’s entire Shakti was released to Pancha Bhutas (Five Elements) through his Kapala and is thus known as Kapaleswar Linga. To the North of Kapaleswara Linga, Skanda established ‘Shakti Chhidra’ Tirtha, where the auspicious Patala Ganga River gave its presence, which is the demolisher of even grave sins. Lord Siva assured that worship to this Linga on Chitra Krishna Chaturdasi (preferably falling on Mondays) by observing fast and day long ‘Rudra Parayana’ or the Recital of Rudra Geeta in praise of Parama Siva would secure the Devotee concerned a place in Rudra Loka. Enthused by the three Lingas set up by Kartikeya, Lord Brahma established a Siva Linga nearby a Sarovar or a pure water-body and it is said that Bhagavan Siva Himself would with His own hands receive the offerings by a devotee reciting ‘Sadyojathaadi Pancha Mukha’ or Five Faced Siva Mantras. Like wise anybody establishes a Siva Linga and a Temple Complex would surely reserve a place in Siva Loka. Those who clean up any Siva Temple with a broom would be free from ailments and illness; white-washes a complex or paints it would improve physical strength; decorates the Linga with flowers, Kusha grass, til or sesame seeds, ‘Akshatas’ or rice grains mixed with turmeric powder would stay in Swarga Loka for many ‘Divya’ years; those who perform ‘Abhisheka’ (Bathing) to the Siva Linga with milk, curd, ghee / butter or even pure water would receive double the benefits; those who apply Kapila Cow’s ‘Panchagavya’ comprising milk, curd, ghee, urine and dung in equal proportions along with Ganges Water, Kusha water or Sandal wood paste liquid with Mantras of ‘Namakam’ and ‘Chamakam’ would attain ‘Parama dhama’ or Moksha. A devotee performing ‘Shodasopacharas’ or Sixteen Services including offering sandal paste, Agar or incense / Dhoop, Dipa (lighting of cotton vicks soaked in ghee), chaamara (hand fan), ‘Naivedya’ (offering of food items), Ghanta (Bell), Shankha (Conch shell), ‘Geet’ or Singing in praise of Siva, Vadya (instrumental music), ‘Nritya’ (dance), Ratha Yatra (Chariot drive) and similar services according to one’s own capacities and desires would yield immense benefits. After setting up the Tri Linga Complex called ‘Kumareswara’, Skanda along with Devas and Brahma extolled Bhagawan Siva as follows:

(Our Greetings to you Siva, who is devoid of all kinds of sorrows and physical ailments, the epitome of propitiousness; who is worshipped by the entirety of Devas and is ever merciful to Devotees; who is the origin of Creation and the Supreme Architect of the Universe, the demolisher of Kamadeva the Lord of Love; the Administrator of the most confidential ‘Vratas’; the Lord of ‘Maha Gahan’ or the Illusory Sky; the most elusive Yoga Maya; the unknown Sharva at the time of the Great Illusion; the most ancient ‘Siddha Swarupa’ or the well established Body Figure; the Kaala Rupa or the Form of Time; the Wizard Accountant of the Pluses and Minuses of all Beings; the Unknown Entity beyond the scope and reach of Time; the Natural Source of Wealth and Prosperity; the Essence of Abundance and Miracles; the Unique anchor of Hope and the Final Refuge; the Nirguna Brahma or the negation of Gunas / human characteristics; the Supreme Chief of all the Worlds; the Great Bestower of boons to Bhaktas; the Final Judge of ‘Karmaphal’ or the End results of Actions; the Hold and the Holder; the Preserver and the Prop; the Endless Form; the Angriest and the most Logical; the Immeasurable; the ‘Mahoushadhi’ or the Supreme Physician; the destroyer of all kinds of diseases and disorders; the Grand Chief of Movable and Immovable Objects; the Master of the IIustrious Kumara; Mahesha, Bhutesha, the Fountain Head of desires and joys; the Lord of ‘Vani’ the Goddess of Learning and Clarity of Expressions; the Lord of Strength and Mind; the Controller of Anger and Equanimity; the Epitome of Moha or infatuation; the Chief of this and all other destinies and the Overlord of Moksha or Salvation.)

As Kartikeya prostrated before Bhagavan with extreme devotion, Parama Siva complimented the former about his valour and intellect and assured that those who worship him by morning and evening would be rid of malady, poverty, cowardice and attain ‘Paramadhaam’. More so, those who adore Kartikeya on Visakha Pournami on a seashore or river bed by observing purity and perform Puja, havan, Recital of Rudra, and charity to learned and well deserved Brahmanas would steer clear of Shathru Peeda (Terror of Enemies), Mrityu Peeda (Fear of untimely death), Visha Roga (Disease due to Poisonous Sources), alarm of thieves, fright of snakes and cruel animals etc; on the other hand, the devotees are blessed with health, wealth, progeny, comfort and contentment.